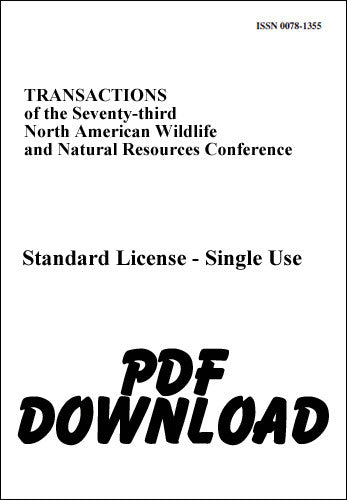 Remarks of the Secretary of the U.S. Department of Agriculture, Edward T. Schafer

Status and Structure of the North American Wild Turkey Management Plan: An Integrated Approach to Wildlife Management, Mark A. Hatfield and Scott Vance

Beyond Compliance: The Challenges and Opportunities of Responsible Water Resource Monitoring, Management and Mitigation, Patricia Mulroy

Partnerships between the Arizona Game and Fish Department and the Department of Defense in Arizona, Duane L. Shroufe and John Hervert

Workshop 1: The North American Model of Wildlife Conservation: Affirming the Role, Strength and Relevance of Hunting in the 21st Century

Public Opinion on and Attitudes toward Hunting, Mark Damian Duda and Martin Jones

The Economic Contributions of Hunting in the United States, Rob Southwick

Addendum to Session Five: A View from the Trenches: Reflections on the North American Model of Fish and Wildlife Conservation from a State Agency Perspective, Ronald J. Regan and Joanna Prukop

Published annually since 1915, the Transactions of the North American Wildlife and Natural Resources Conference provide a unique and informative record of the direction and momentum of professional natural resource management. Tracking current research and management emphases and the perspectives and approaches to meeting the challenges to sustaining and conserving North America's wildlife and their habitats, the Transactions is a valuable reference for all who deal with the complexities and intricacies of natural resource issues, policies and programs.