Following more than two years of consumer research and planning, the State of Illinois unveiled “Copi,” the new name for Asian carp. The new name and brand are designed to address public misconceptions about this delicious top-feeding fish, which is overrunning Midwest waterways. 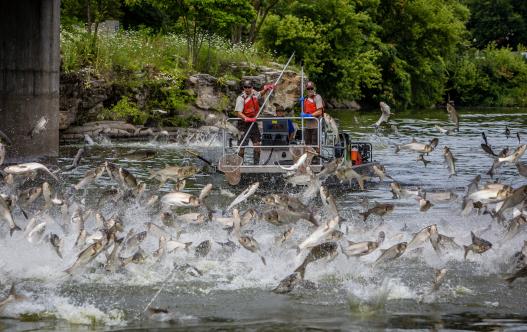 Copi (choosecopi.com) are mild, clean-tasting fish with heart-healthy omega-3s and very low levels of mercury. Increased consumption will help to stop them from decimating other fish populations in the Great Lakes and restore an ecological balance to waterways downstream.

The new name is a play on “copious” – as that’s exactly what these fish are. By one estimate, 20 million to 50 million pounds of Copi could be harvested from the Illinois River alone each year, with hundreds of millions more in waterways from the Midwest to the Gulf Coast.

American consumers often confuse the four species known collectively as Asian carp with another species, the common carp, which was imported from Europe in the 1800s. That fish is a bottom-feeder and can contain some funky flavors depending on where it has been. This is not the case for Copi, which was brought to the U.S. in the 1960s or 70s and are not bottom-feeders. But the association looms large for some people.

Changing a fish’s name has been a tried-and-true strategy for other fish. Orange roughy was originally known as slimehead; Chilean sea bass was known as Patagonian toothfish (it’s not even a bass); and peekytoe crab was once known as mud crab. This strategy has been used for more than fish: exporters introduced Chinese gooseberries as “kiwi,” for instance.

Illinois officials will apply to formally change the name with the U.S. Food and Drug Administration by the end of the year. “Among the requirements to win federal approval for a name change is widespread use of the name, which is another reason why today’s event is so important,” said Kevin Irons, the assistant fisheries chief for the Illinois Department of Natural Resources, who specializes in invasive species. “So there is one thing that everyone can do to help save the Great Lakes: Call the fish Copi.”