What was once considered a sporadic malady affecting a few Roosevelt elk herds in the southwestern tip of Washington is now garnering the worried attention of wildlife biologists and veterinarians throughout the northwestern U.S. 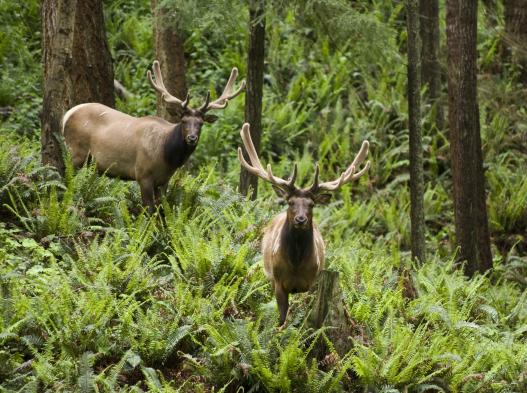 Associated with a polybacterial infection dominated by Treponeme bacteria, the syndrome has been labeled “Treponeme associated hoof disease” (TAHD) but is more commonly referred to simply as “elk hoof disease.” Currently affecting both Roosevelt and Rocky Mountain elk subspecies, this disease results in deformed, irregularly grown, broken or sloughed hooves in affected animals. Lesions caused from the bacterial infection are extremely painful, cause limping or lameness, and in some cases result in the infected animal being forced to walk on exposed bone. The impacts of the disease range from increased mortality of infected animals to lower herd birth rates and even significant antler abnormalities and asymmetry. The Washington Department of Fish and Wildlife has reported observing elk herds with 20-90% of the animals showing lameness and other outward, clinical signs of the disease.

“It's a very complex disease and closely mimics many aspects of the cattle variant of digital dermatitis,” noted Dr. Colin Gillin, State Wildlife Veterinarian for the Oregon Department of Fish and Wildlife. Gillin, along with many other wildlife veterinarians and university researchers, have monitored TAHD’s emergence as a novel disease in Roosevelt elk, first noticing potential cases in the late 1990’s. Since then, TAHD has seemingly expanded its range from a small area north of the Columbia River in southwest Washington to new areas in Oregon, Idaho, and California. Though the mechanisms of transmission are not yet fully understood, current consensus among scientists is that the disease-causing agents are spread via contact between animals and bacterial-contaminated soil.

According to Gillin and researchers from both Washington State University and the Washington Department of Fish and Wildlife, cases of TAHD reported by hunters and biologists “increased markedly after 2008” in both prevalence and geographical distribution. The causes of this sudden increase after the disease appeared to remain relatively localized for nearly two decades are not well understood by researchers. That said, experts like Dr. Margaret Wild, a professor at the College of Veterinary Medicine of Washington State University (WSU) and a premier TAHD researcher, are concerned but not too surprised by TAHD’s expanding distribution and prevalence.

“We knew the highest prevalence of TAHD was in WA and OR, but that was prior to any active TAHD surveillance effort,” she commented. When Wild joined WSU in 2018 thanks to TAHD-earmarked funding made available by the Washington legislature, she began asking colleagues in neighboring states to send hooves from harvested and culled elk to her lab, regardless of whether the animal showed clinical signs or not. “That’s when we started to document incidences of the disease in more areas and with more frequency,” recounted Wild.

As noted in a paper published July 2022 in the Journal of Wildlife Diseases by Wild and her colleagues, “Infectious diseases in wildlife often go undetected and are rarely limited to a single local geographic location after emergence. Although outbreaks in conspicuous species are more readily detected, sporadic cases of disease occurring at low prevalence across a range can be elusive.” (Surveillance for an Emergent Hoof Disease in Elk (Cervus elaphus) in the US Pacific West Supplemented by 16S rRNA Gene Amplicon Sequencing. MA Wild et.al.)

This is particularly true for new and little-studied diseases like TAHD where, according to the paper’s authors, “…the etiologic agent may not be definitively known, so traditional pathogen-specific diagnostic tests (e.g., PCR) may either be unavailable, inaccurate, or misleading.” Simply put, TAHD’s spread may have been occurring over a longer time period and larger geographic area than previously assumed due to an absence of strategic, active sampling and a dearth of definitive TAHD-diagnostic tests. As noted by retired Director of the Southeastern Cooperative Wildlife Disease Study Dr. John Fischer, “You tend to find wildlife diseases with greater frequency when you have the resources and tools to start looking for them in earnest.”

Whatever the causes for TAHD’s pernicious march across the Northwest, experts are now most interested in establishing better surveillance strategies as well as developing reliable transmission models to aid agencies in their future efforts to manage the disease’s impact on the health of North American elk populations.

“We really want to develop a robust transmission model in captive research elk. This will allow us to investigate factors that may increase elk’s susceptibility to the disease and determine if other hooved wildlife are susceptible,” said Wild. Fortunately, TAHD does not seem to impact deer species given that no cases have been reported thus far from deer living in proximity to affected elk herds. But with the disease’s westward expansion, Wild and Gillin are both concerned about TAHD spill-over into larger and more migratory elk herds, as well as re-established bison populations. “Digital dermatitis has been shown to affect captive European bison, so we need to understand more about the risks that TAHD expansion in western states may pose to wild bison herds,” cautioned Wild.

Given TAHD’s relatively recent emergence, only time will tell how impactful this new disease will be on North America’s elk population or how tenaciously it will resist the management efforts of biologists. To date, no vaccines or medications have proven significantly impactful at eradicating other strains of digital dermatitis and none of the tactics used in managing the condition in domestic animals are likely to prove useful in wildlife populations. For now, removal of affected animals appears to be the best, and perhaps only, tool accessible to wildlife management agencies. In the future, however, polices that prohibit artificially congregating animals via baiting or feeding would likely prove effective at slowing TAHD’s impacts considering the disease’s dependance on environmental contamination and animal to animal contact for transmission. Plus, notes Wild, such actions could only benefit efforts to fight another threat to North America’s elk herds. “We should never miss a chance to implement policies or practices that could help control both TAHD and chronic wasting disease.”

To learn more about TAHD, please visit the below online resources