Over the past 50 years, golden-winged warbler populations in the eastern portion of their North American breeding distribution have experienced some of the steepest declines of any Neotropical-Nearctic migratory songbird and until recently the cause of these declines has been a mystery. Recent research by the USGS Minnesota Cooperative Fish and Wildlife Research Unit and the West Virginia Cooperative Fish and Wildlife Research Unit, collaborators at the University of Toledo and the University of Tennessee, and partners at 22 study sites across eastern North America has shed light on the probable cause of these declines. 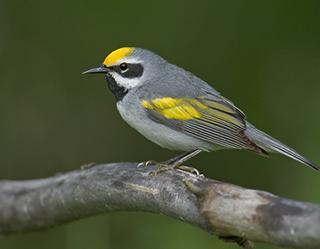 Golden-winged warblers are a species of high conservation concern primarily in the eastern portion of their breeding distribution and have been petitioned for listing under the U.S. Endangered Species Act (current listing status: Under Review). Identifying the causes of population declines in wildlife populations is essential in developing meaningful conservation strategies to address factors most responsible for influencing population ecology.

In a recent study published in Proceedings of the National Academy of Sciences, the CRU and partner researchers tracked golden-winged warblers, blue-winged warblers, and their hybrids (all warblers in the genus Vermivora) from 22 breeding sites in North America to nonbreeding sites in Central America and South America. The researchers present a range-wide assessment of the nonbreeding distribution and migratory connectivity of two broadly dispersed Nearctic-Neotropical migratory Vermivora warblers. The researchers used light-level geolocators to track the movements of 70 warblers from sites spanning their North American breeding distribution and identified links between breeding populations and nonbreeding areas.

Identifying drivers of population trends in migratory animals is difficult due to their reliance on different geographic regions throughout the annual cycle. In this study, the strong migratory connectivity documented in Vermivora warblers is associated with varying rates of land-use change in population-specific nonbreeding areas. In other words, declining populations of golden-winged warblers wintering in South America occurred in areas that have experienced more extreme deforestation than areas in Central America where stable populations of golden-winged warblers and blue-winged warblers overwintered. This study provides strong support for the notion that golden-winged warbler populations, and potentially populations of several other Neotropical-Nearctic migratory songbirds, may be limited by the amount or quality of winter habitat. This suggests that conservation efforts currently focused on providing high quality breeding habitat may need to be expanded to providing high quality wintering areas to reverse long-term declines. The research also suggests that other migratory species with similar population trends may also exhibit strong migratory connectivity and those species’ population trends may be associated with extensive, regional deforestation in their wintering distributions.

The observations of migratory connectivity in Vermivora warblers represent a major advance in understanding the drivers shaping migration strategies; the distribution of populations throughout the annual cycle; and, ultimately, the evolutionary trajectories of migrants in the rapidly changing Anthropocene. Studies like this may benefit future research focused on identifying genomic regions associated with specific migratory behaviors. This research may also help illuminate the ecological contexts in which certain migration strategies are advantageous and whether species have the behavioral or genetic flexibility to adapt to rapidly changing conditions.

Results from this and related research efforts have helped change the paradigm about the relative importance of nest success, fledgling survival, and breeding habitat in forest-nesting songbird population ecology. The findings highlight the value of collecting information about the annual movements of species across their distribution, and studies like this can aid in the conservation of migratory species, such as Vermivora warblers, in the future.

The ONB features articles from Cooperative Fish and Wildlife Research Units across the country. Working with key cooperators, including WMI, Units are leading exciting, new, fish and wildlife research projects that we believe our readers will appreciate reading about. This article was written by: