Beavers in the Desert? The Potential for Translocated Beavers to Serve as Restoration Tools in Desert Rivers

Beavers in the Desert? The Potential for Translocated Beavers to Serve as Restoration Tools in Desert Rivers

The USGS Utah Cooperative Fish and Wildlife Research Unit at Utah State University (USU) is partnering with the Ecology Center (USU), the Bureau of Land Management, the Bureau of Reclamation, Utah Division of Wildlife Resources, and U.S. Department of Agriculture-National Wildlife Research Center to evaluate the efficacy of beaver translocation for desert river restoration by comparing the fates, space use, and dam building activity of naturally occurring and translocated beavers in the Price and San Rafael Rivers in eastern Utah. 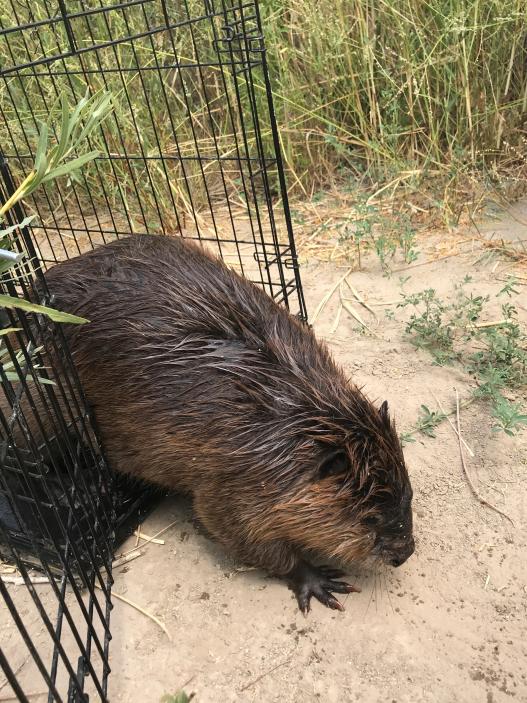 American beavers are ecosystem engineers, creating and maintaining habitat for a variety of species by building dams. In natural systems, beaver dams can play an important role in water retention, especially in arid environments, and in restoration of degraded waterways. On the other hand, beavers can cause conflict with humans when their dams jeopardize infrastructure such as roads and culverts. These nuisance beavers are often lethally removed to mitigate the situation.

Beaver translocation is an alternative solution to lethal control that is gaining popularity. Beavers are taken from a conflict situation and translocated to a targeted area with the goal of harnessing their dams as a passive, cost-effective, and natural method of restoration. The challenge of translocation is getting beavers to stay, survive, and build dams in a specific area. Success of beaver translocation projects varies widely and lacks standardized best practices; failures are typically undocumented, and the cause of failure is often unknown.

Both the Price and San Rafael rivers are extremely dynamic but with highly altered hydrographs and drought resulting in sections that are extremely degraded and simplified. The addition of more dams from translocated beavers could help increase fish habitat complexity and mitigate the effects of drying. The habitat created by beaver dams is important for three native desert fish species on the Utah Sensitive Species List: the bluehead sucker, flannelmouth sucker, and the roundtail chub as well as the Endangered Species Act listed fishes of the Green and Colorado rivers.

So far, nine naturally occurring beavers have been captured and monitored, seven adult residents and two subadults, while 31 nuisance beavers have been translocated to the rivers, 18 adults and 13 subadults. All individuals were fitted with a tail-mounted radio-transmitter and a PIT- (passive integrated transponder) tag for post-release monitoring. Most (65%) of the translocated beavers have unknown fate, from radio-transmitter failure or individuals leaving the targeted restoration areas, while only 33% of resident beavers had unknown fate. Translocated beavers also experienced proportionally higher mortality (19% vs. 11%), primarily due to predation or exposure during drought. The only mortality of a naturally occurring beaver was a dispersing subadult, preyed upon by a mountain lion.

There were 15 existing beaver dams in the study areas, and five new dams were built during the study between June 2019 and September 2020. Two of the new dams were constructed in resident territories, while three were constructed in an area with no known established population prior to the study, based on sign surveys. Beavers were translocated to this site but based on trail camera photos and lack of PIT antenna detections, it is likely that the three dams were built by beavers naturally colonizing the area.

In this study, it appears that translocated beavers have not directly contributed to restoration efforts by building dams, likely due to their higher mortality rates and larger space use, spending more time traveling and exploring than remaining in an area and using their energy to construct a dam. This is similar to the behavior of dispersing subadults as they search for a new territory to establish. However, given the behavior of the translocated beavers and the wood-limited systems they were translocated into, the outcome likely would have been different if translocations were accompanied by the construction of structural features such as beaver dam analogues.

This study also highlights the importance of post-release monitoring. If no monitoring of individual movements and behaviors were taking place, it may be falsely assumed that translocated beavers built the newly observed dams. Other studies have had varying success with translocation, but perhaps the initial results are an indicator that harsher, arid systems are more difficult for translocated beavers to establish. This could be due to poorer habitat quality, with the best habitat already occupied by naturally occurring beavers.

Restoration efforts could be focused around existing dams, or to obtain establishment goals of translocated beavers in these degraded arid streams, structural features could be installed to encourage dam building (e.g., beaver dam analogs). Targeted restoration areas could also be expanded to account for large movements of translocated and dispersing beavers.

Translocation for restoration has variable success but remains an effective alternative to lethal control as a method to mitigate human-beaver conflict, helping to conserve wildlife and fostering an attitude of human-wildlife coexistence.