Two encounters with grizzly bears in the past nine months reinforce the need for people living, working, and recreating in grizzly bear range to carry bear spray in an accessible manner and know how to use it. Last September, a Wyoming guide and nonresident hunter were attacked by two grizzly bears while field dressing an elk the hunter had killed the previous day. The guide suffered injuries that were ultimately fatal, but evidence suggests that he was able to terminate the attack by using bear spray before he expired. An investigative report released in January by the Wyoming Game and Fish Department (WGFD) found that the hunter’s bear spray was unavailable, inside a backpack at the time of the attack. Not having the bear spray accessible precluded deployment of the spray at the onset of the attack. On April 7, 2019 a 17-year-old male was attacked by a bear – suspected to be a grizzly – south of Ennis, MT. In that encounter, the teen was able to deploy bear spray after initially being knocked to the ground by the bear. The spray terminated the attack, during which the young man suffered only minor injuries. These events demonstrate that bear spray can deter aggressive bear behavior, but the spray must be readily accessible and individuals must know how to use it to be effective. 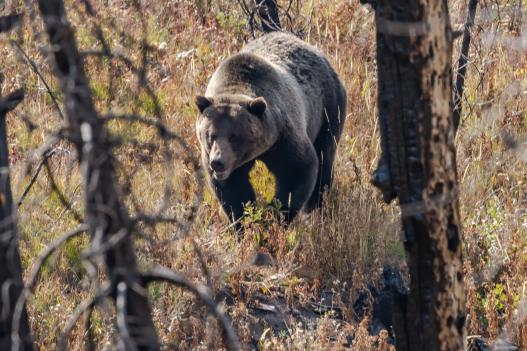 On September 14, 2018 a Wyoming guide and nonresident hunter were field dressing an elk the hunter had killed the previous day. At approximately 4:00 pm, an adult female grizzly bear and her yearling male cub charged the two men. The adult female initially attacked the guide. The guide had a can of bear spray in a belt holster, but was unable to deploy the spray before the bear made contact. The hunter also had bear spray, but had removed it from his belt earlier in the day and placed it in a backpack. The hunter grabbed a handgun that was near the backpacks 5 to 10 yards away, but was unable to fire the weapon due to lack of familiarity with the Glock 10 and out of concern for shooting the guide. The bear briefly left the guide to attack the hunter, who suffered minor injuries, then returned to the guide. The hunter fled on foot and horseback to reach cellphone coverage and call for help. Emergency responders reached the hunter late in the day, but darkness precluded a successful search for the guide.

The following day, personnel from WGFD, Teton County Sheriff’s Office and Teton County Search and Rescue located the scene of the attack and the guide’s body. Evidence gathered at the scene confirmed that an adult female grizzly and yearling male were involved in the attack, in an apparent attempt to seize the elk carcass. Both bears were ultimately located and killed by WGFD personnel. The female bear had bear spray residue on her head. The guide’s undisturbed body was found approximately 50 yards from the site of the attack. An empty can of bear spray was located next to him. The WGFD investigators and the Teton County Coroner deduced that the guide was able to deploy his bear spray and terminate the attack, after which he walked some distance before succumbing to his injuries.

On April 7, 2019 a 17-year-old male who was searching for shed antlers alone in the mountains east of Ennis, MT was attacked by a bear – suspected to be a grizzly – in what Montana Fish, Wildlife, and Parks personnel have concluded was a defensive attack caused by a surprise, close encounter. As in the Wyoming attack, the bear made contact before the teen could deploy his bear spray, but he was able to spray the bear after being knocked to the ground. The spray immediately terminated the attack. The young man was able to walk away from the site and was treated for minor injuries and released from the Madison Valley Medical Center.

It is impossible to say whether the outcome of the attack in Wyoming would have been different if the hunter’s bear spray had been readily accessible. However, the fact that it was inaccessible, inside a backpack precluded the hunter’s ability to deploy it. The Montana teen’s ability to rapidly deploy bear spray likely prevented serious injury in that attack.

These events reinforce the need to carry bear spray in a readily accessible manner and know how to use it when living, recreating or working in bear range. In combination with being aware of your surroundings, traveling in groups and making noise, bear spray can reduce your risk of injury. The Wildlife Management Institute produced a demonstrational video for the Interagency Grizzly Bear Committee that provides more information about safety in bear country.