Much of the Midwest has been affected by an extraordinary winter and subsequent spring flooding in recent weeks. While winter conditions were mild in late 2018, winter conditions became severe in 2019 with several periods of extreme snow and cold. Media reports have provided coverage of human and agricultural impacts, yet little has been reported on the impacts to fish and wildlife populations as well as the agencies that manage fish and wildlife and associated outdoor recreation. 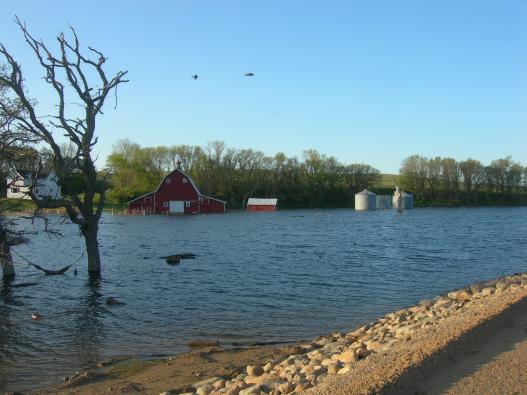 Early reports suggest the deep snow, ice and sub-zero temperatures will have significant impacts on game bird species like quail and pheasant in the Midwest. Todd Bogenschutz, an upland wildlife research biologist with the Iowa Department of Natural Resources, says snowfall in March equaled what the state often gets from December through March. Even with some warm-ups it was not enough. “We just melted the snow that was there but we didn’t melt it to the ground and then it got cold with the blizzard on top of it,” Bogenschutz says. “It turned it to ice and then we got the new snow on top, making it very difficult for the birds to dig through that now to get down to any waste grain on the ground.” Assessments are just beginning on turkey, pronghorn, deer and other species populations to determine impacts.

Less obvious but significant is the impact of flooding on fish species. For example, flooding connected tributaries of rivers to many lakes and ponds, providing a pathway for introduction of Asian carp. In addition, the prolonged winter and recent frigid weather are keeping ponds covered with snow and ice well into March, creating conditions for a winterkill, said Jeff Blaser, private waters specialist with the Nebraska Game and Parks Commission. Heavy rainfall, fast snow melt, ice jams and flooding starting in northwest Iowa caused several wastewater discharges from city treatment plants. The rapid snowmelt also increased runoff of manure into rivers and streams as livestock manure containment facilities reached capacity.

Fish hatcheries in Nebraska, normally preparing for spring stocking of trout and other fish species were closed by flooding. Nebraska Director Jim Douglas reported that staff first had to rebuild a road to one hatchery in order to move fish to stocking locations. Both Iowa and Nebraska announced delays in some stockings due to thick ice or flooding, conditions that occurred at the same time in different parts of the state.

Flooding caused closure of many state parks, preventing many people from enjoying the outdoors. Some state parks, state historical parks, state recreation areas and wildlife management areas located along rivers and streams in eastern and central Nebraska experienced flooded roads, campgrounds and buildings during the historic and catastrophic flooding. In addition, South Dakota and Minnesota reported impacts to state recreational facilities. All Midwest states are advising recreational users of these areas to check the status of the desired public area before traveling. The deep snow and rapid thaw are also affecting forest management activities. Minnesota closed many temporary roads after conditions made use of the road difficult.

Nebraska Game and Parks Commission advised great caution in boating activities. “Strong currents and inadequate clearance under bridges make kayaking, canoeing and recreational boating extremely dangerous at this time. Uprooted trees, concrete, metal and other materials swept away in the flood may be submerged or partially submerged in waters that experienced flooding, creating potentially deadly obstacles in rivers and lakes alike.”

Fish and Wildlife agency staff are among the best of the first responders because of their skill sets with outdoor equipment and knowledge of the environment. Iowa DNR deployed teams of employees who responded to flooding events during March 14-25, 2019. More than 34 DNR conservation officers and two DNR park rangers from across the state have responded to western and southwestern Iowa, working collaboratively in two-officer teams per boat from dawn to dusk. Those officers have performed rescue missions via DNR boats saving 31 people, 17 dogs, 9 cats, and one iguana.

With another significant winter storm impacting the Midwest in mid-April, additional long-term impacts are anticipated throughout the region. As spring progresses, agencies will be working to assess damage to public land infrastructure that are key to providing access to outdoor activities. Flooding and high water levels will compromise the use of many boat ramps and boat launch sites, requiring the cleaning and refurbishing of access points on many rivers and lakes. Roads and trails will likely be reopened as conditions allow. Let’s hope better weather is just around the corner!