The commercial collection of marine ornamental fishes from coral reefs for the aquarium trade is one of the most controversial fisheries in Hawai'i. While there are numerous socio-economic, cultural, and ethical issues surrounding the fishery, most of the controversy relates to whether the fishery is being managed sustainably. The Hawai'i Cooperative Fishery Research Unit is assessing the impact of the marine ornamental fishery on Hawaiian reefs by using citizen-diver data sources independent of the existing state monitoring and permit-holder reporting programs. 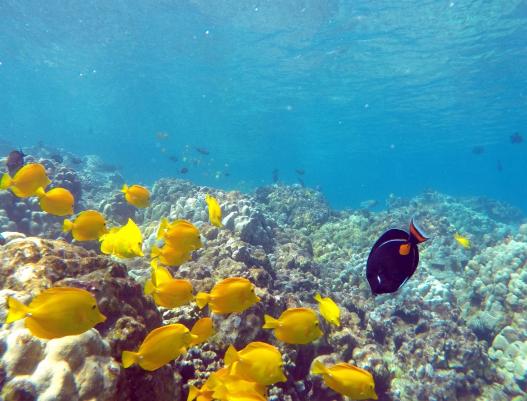 Concerns about whether the state of Hawai'i adequately assessed the sustainability and impact of collection activities prior to issuing collection permits led to the closure of the fishery in 2018. The sustainability of the marine ornamental fishery and its impact on Hawaiian reefs is contentious in large part because the monitoring data collected by the state to assess its impact are limited. Opponents of the fishery question the accuracy and reliability of the self-reported catch and effort data provided by the collectors and view the state conducted monitoring as too limited spatially and temporally to draw adequate conclusions regarding the impact of the fishery.

Volunteer citizen-diver fish survey data collected by the Reef Environmental Education Foundation (REEF) in Hawai'i is being used to evaluate trends in the occurrence and abundance of the most commonly targeted reef fish species in areas open to collecting compared to those in areas where the collection of marine ornamentals is prohibited. The REEF survey methodology asks volunteer citizen divers to record all fishes that the diver could identify to species and assign each species a relative abundance score. The survey data are then submitted to REEF for quality assurance and entry into their database.

A total of 15,884 fish surveys were conducted by volunteer citizen divers using the REEF roving diver survey methodology during 2000 – 2018. The most common species of reef fishes exported from Hawai'i were identified using data derived from anonymized customs declarations from 2005 – 2018 provided by the U.S. Fish and Wildlife Service. The data collected from customs declaration forms are also being used to characterize the catch of marine ornamentals and evaluate economic trends in the fishery. The quality of the data is often comparable to that collected by more traditional monitoring and experimental approaches. Further, the greater spatial-temporal sampling coverage and public engagement relative to more traditional approaches can offer a higher degree of confidence in the results by policymakers and the general public when applied to controversial issues.

The marine ornamental fishery in Hawai'i consists of at least 162 species. However, a single species, Yellow Tang Zebrasoma flavescens, accounts for approximately 75 percent of the individuals exported from Hawai'i and an additional nine species accounted for another 18 percent. For eight of these top ten species, including Yellow Tang, there was no evidence that being targeted in the marine ornamental fishery influenced their occurrence or reported abundance in volunteer citizen diver surveys. These species seem to have stable or increasing populations based on volunteer citizen diver survey data, suggesting that their populations are not being overexploited on Hawaiian reefs.

However, two species, Achilles surgeonfish Acanthurus achilles and Hawaiian cleaner wrasse Labroides phthirophagus, did show declines in both occurrence and reported abundance during the study period, suggesting that species that are also targeted in subsistence and recreational fisheries, such as Achilles surgeonfish, or that might exhibit naturally low population densities, such as Hawaiian cleaner wrasse, may warrant special management considerations. Protection status had a clear effect on reported abundance, with areas that restricted collection of ornamental species having greater mean abundance score than areas where collection was permitted.

The citizen science data collected by REEF agreed with the monitoring data collected by state agencies which indicated that the impacts of the marine ornamental fishery seemed to be minimal on the populations of targeted species. Further, both data sets seem to suggest that management measures, primarily marine protected areas, implemented in areas experiencing the highest fishing pressure from collectors, such as along the west coast of Hawai'i Island, were effective.

The preliminary results of this study suggest that citizen science data could be a useful management tool to evaluate whether population trends of reef fishes observed in data collected from more traditional monitoring programs are occurring at broader spatial scales and at a magnitude detectable by the general public. It also provides an opportunity for state and federal resource agencies to demonstrate both the need for conservation and management actions as well as highlight success stories directly to stakeholders using data that the stakeholders generated themselves.

The ONB features articles from Cooperative Fish and Wildlife Research Units across the country. Working with key cooperators, including WMI, Units are leading exciting, new, fish and wildlife research projects that we believe our readers will appreciate reading about. Story by Tim Grabowski, Unit Leader and Adjunct Associate Professor, Grabowski Lab, Hawai'i Cooperative Fishery Research Unit at the University of Hawai'i at Hilo.