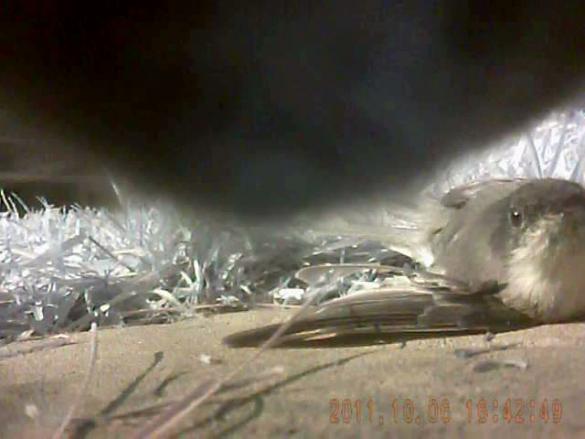 A study released this month by The Wildlife Society and the American Bird Conservancy suggests that nearly one-third of free-roaming house cats are capturing and killing wildlife, reports the Wildlife Management Institute. Conducted by the University of Georgia, in partnership with the National Geographic Society's Crittercam program, the study attached "KittyCams" to 60 outdoor house cats near Athens, Georgia. The cameras recorded their outdoor activities during all four seasons with study participants averaging five to six hours outside every day.

"The results were certainly surprising, if not startling," said Kerrie Anne Loyd of the University of Georgia, who was the lead author of the study. "In Athens-Clarke County, we found that about 30 percent of the sampled cats were successful in capturing and killing prey, and that those cats averaged about one kill for every 17 hours outdoors or 2.1 kills per week. It was also surprising to learn that cats only brought 23 percent of their kills back to a residence. We found that house cats will kill a wide variety of animals, including: lizards, voles, chipmunks, birds, frogs, and small snakes."

The finding that cats are only bringing back fewer than one-quarter of their kills to their residence counters previous studies that tried to gauge the impacts of domestic cats on wildlife. Those earlier estimates of a billion birds and animals per year were based on mortality counts from animals that the cats brought home with them. The KittyCams showed that nearly half of the time (49 percent) cats would leave the prey at the capture site and 28 percent were eaten and never brought home. The new study does not take into consideration the impacts of the estimated 60 million feral cats that roam the United States. A University of Nebraska study from 2010 states that cats have been responsible for the extinction of 33 bird species worldwide.

"If we extrapolate the results of this study across the country and include feral cats, we find that cats are likely killing more than 4 billion animals per year, including at least 500 million birds. Cat predation is one of the reasons why one in three American bird species are in decline," said Dr. George Fenwick, President of American Bird Conservancy.

The researchers also found that the cats were engaging in risky activity. The study found that 45 percent of the cats crossed roads and 20 percent each entered crawlspaces and storm drain systems where they could become trapped. In addition, 25 percent of the study cats interacted with strange cats increasing the potential for fights or disease transmission. Eighty-five percent of the project cats exhibited at least one risk behavior with male cats and younger cats being more likely to take risks.

As a result of the risk behaviors and the higher than anticipated predation, the researchers developed a brochure for cat owners with an overview of the findings and recommendations for cat owners.