The Role of Drought in Aquatic Systems

The Role of Drought in Aquatic Systems

The Arkansas Cooperative Fish and Wildlife Research Unit is examining how drought and climate change affect freshwater ecosystem structure and function. Drought is a natural disturbance of aquatic and terrestrial ecosystems in many regions worldwide and can be a major factor that impacts aquatic communities. Drought frequency and intensity are expected to increase due to climate change and can also be exacerbated by water withdrawals and other human impacts, such as agricultural and industrial uses. 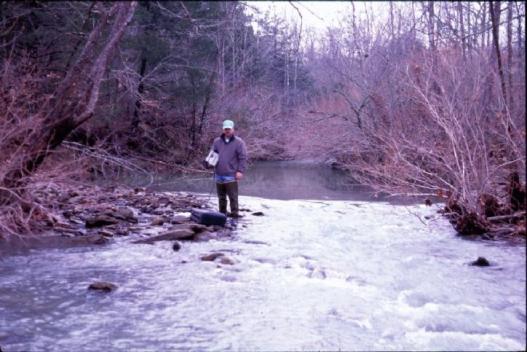 Disturbances through drought affect both human water use and ecosystem structure and function. When drought occurs, it leads to reduced surface and subsurface water in many freshwater systems, especially streams and rivers. This can lead to partial or even complete stream drying and can have major impacts on freshwater organisms, populations, and communities such as fish, invertebrates, and algae. Major impacts include fish and invertebrate population reduction, food web shifts, and loss of ecosystem function.

The researchers use a combination of comparative field studies, field and lab experiments, and modeling approaches at different spatial scales to understand population and community dynamics in stream ecosystems.

In one study, the researchers examined the role of drought and hydrologic variation in structuring stream fish assemblages. The team found that drought and hydrology had a strong influence on fish assemblage dynamics in Ozark streams, with lower fish assemblage stability and greater fluctuations in fish density in streams and years with more intense drought. In two other studies, researchers examined what habitats act as refuges for fish and crayfish during seasonal drought and found that refuge habitats were species and size class dependent, with some fish species using pools as refuges and some crayfish species using the subsurface wetted area as refuges. Understanding relationships between drought and the population and community dynamics of fish and invertebrate species is vital for conservation of freshwater biodiversity.

This research is useful for addressing water use issues, such as those stemming from drought, agricultural uses, and aquatic ecosystem conservation. Knowledge and technology transfer are key aspects of this research, including use of cutting-edge artificial intelligence, machine learning, and spatial analysis approaches. For example, scientists have used a new machine learning approach that examines environmental thresholds for fish species assemblages and can enable researchers to determine important stream flow or other environmental variable thresholds for whole assemblages as well as individual species.

This research is carried out with many project partners, including state and federal agencies, other universities and institutions, and non-governmental organizations. Groups interested in this work range from conservation biologists, to fisheries managers, to anglers, to agricultural stakeholders, to municipal water users. The project results may form the basis for setting state and regional environmental flow standards and understanding impacts of land use and climate change. This has positively impacted many species and ecosystems region-wide, including species of greatest conservation need and also those related to human use, such as fisheries.