Groups Petition to Block Pittman-Robertson Funds for Idaho and Montana

Groups Petition to Block Pittman-Robertson Funds for Idaho and Montana

A coalition of 27 wolf advocacy groups led by the Center for Biological Diversity (CBD) petitioned the U.S. Department of Interior and U.S. Fish and Wildlife Service (DOI/FWS) on August 4, 2022 to develop a rule that would find the states of Idaho and Montana ineligible for funding under the Federal Aid in Wildlife Restoration Act (Pittman-Robertson (PR) Act). The petition argues that to be eligible to receive federal aid the PR Act requires states to have laws in place that assent to the provisions of the Act. In response to a letter from the CBD to the DOI/FWS that made the same request (but only for Idaho) in May 2021, the FWS said the requirement for assent language only requires that hunting and fishing license revenue collected by the states was used exclusively for fish and wildlife conservation. By filing a formal petition, the coalition may be laying the basis to challenge the FWS’ interpretation of the PR Act in court. 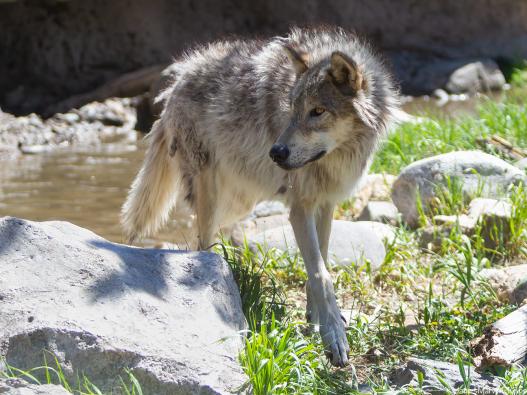 In 2021, both the Idaho and Montana legislatures adopted statutes intended to reduce wolf populations. The new laws, along with regulations subsequently adopted by the Idaho Fish and Game Commission and Montana Fish and Wildlife Commission, authorized hunters and trappers to use methods of taking wolves that do not apply to most game species. These methods include hunting at night, use of dogs to hunt wolves, trapping wolves year-round on private lands in Idaho, and elimination of bag limits. In Idaho, the legislature also authorized private parties to reimburse wolf hunters and trappers for their expenses.

One of the new statutes adopted in Montana, SB 314, directed the Fish and Wildlife Commission to enact new hunting and trapping measures with the intent to “reduce the wolf population in this state to a sustainable level, but not less than the number of wolves necessary to support at least 15 breeding pairs.” The petitioners argue that Montana’s SB 314 seeks to “exterminate” 85% of the state’s current population. Similarly, petitioners claim that Idaho SB 1211 threatens elimination of 90% of the wolves in that state.

The new laws in Idaho and Montana did not result in increased take by hunters and trappers or a reduction in either state’s estimated wolf population during the 2021-22 season. During the 2021-22 hunting and trapping seasons in Montana, the total number of wolves killed by hunters and trappers, 273, was lower than the number killed in the 2020-21 season. In Idaho, the 2021-22 harvest fell within the range of harvests over the past 5 years. Importantly, the total number of wolves killed in both states over the past year remains within sustainable mortality limits for wolf populations and both states estimate that wolf numbers will remain relatively stable in spite of the new laws.

Nevertheless, based on the alleged threat to wolf populations in these two states, the petitioners have asked the DOI/FWS to find that Idaho and Montana are in violation of the assent language in the PR Act and ineligible to receive federal aid funds. The petitioners assert that the PR Act requires states to enact laws that “ensure the conservation of fish and wildlife,” with “conservation” defined in the act, in part, as including, “the use of methods and procedures necessary or desirable to sustain healthy populations of wildlife.” The petition argues that Montana’s SB 314 and Idaho’s SB 1211 as well as regulations adopted in both states are inconsistent with sustaining healthy populations of wolves.

In May 2021, the CBD wrote a letter to the DOI/FWS requesting they find Idaho ineligible for PR funding based on similar arguments. In response, FWS Director Martha Williams wrote that the PR Act only requires states to adopt laws, “…governing the conservation of wildlife which shall include a prohibition against the diversion of license fees paid by hunters for any purpose other than administration of said fish and game department.” The response goes on to say that the PR Act does not give the DOI/FWS any basis to find a state ineligible on other grounds related to state conservation laws.

CBD’s novel interpretation of the PR Act could be difficult to support for several reasons. First, the history of the assent language suggests a narrow interpretation related to diversion of license fees. Second, while the extreme outcomes of SB 314 and SB 1211 envisioned by the petitioners may be theoretically possible, neither of these bills call for the level of reduction in wolf numbers the petition claims could result. For example, the Montana Fish and Wildlife Commission could adopt regulations that reduce the state’s wolf population by less than 2% and still be in full compliance with SB 314. Further, Idaho’s SB 1211 does not specifically call for any level of reduction in wolf numbers.

If the DOI/FWS once again finds that the arguments made by the petitioners do not warrant rulemaking to declare Idaho and Montana ineligible, the petitioners are likely to ask a federal court to review the matter. If a court interpreted the language of the PR Act as the petitioners do, Idaho and Montana could stand to lose their federal aid allocation which amounted to $28.5 million and $21.3 million, respectively, in FY 23. Further, any state that fails to enact regulations that protect all species from unrestricted killing could potentially be found to be in violation of the PR Act’s assent language. Taken to its logical conclusion, the petitioner’s line of reasoning would mean that any state that allows unregulated take of coyotes, prairie dogs, gophers, or woodchucks could be found ineligible for federal aid.