The Western Association of Fish and Wildlife Agencies’ (WAFWA) Mule Deer Working Group, the Wyoming Migration Initiative, and The Pew Charitable Trusts have teamed up to host a series of wildlife movement and migration workshops that highlight emerging science, management, and policy dimensions regarding big game migrations across the Interior West. The first workshop was held by the Oregon Department of Fish and Wildlife in October of 2017. During the first week of June 2018, Nevada, Arizona, and Utah will host a regional forum in Mesquite, NV, and additional workshops are currently being planned. 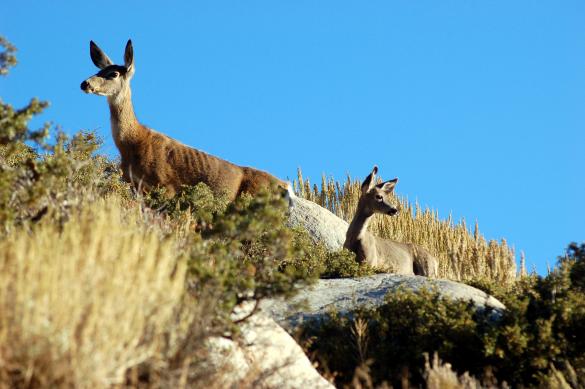 Long-distance big game migrations still occur throughout temperate climates of the West and are critical to herd performance. The identification of the Red Desert to Hoback mule deer migration corridor in 2014 generated international acclaim not only because it happened to be one of the longest migration corridors in the lower 48 states, but also due to the recipe of cutting-edge science, urgent threats unveiled, visual story-telling, and a communication strategy rolled out over the course of more than a year. The corridor’s discovery and management complexity helped motivate the Wyoming Game and Fish Department to update state policy, adding new analytical techniques to designate migration corridors, in addition to stopovers and bottlenecks, as “vital habitat” to be managed for "no net loss of habitat function." The corridor habitat designation creates a mechanism to promote conservation of corridors on public lands through consultation with other state or federal agencies.

Conservation of wildlife migration corridors offers a unique opportunity to engage not only the hunting and fishing community but also the broader public. This effort also has significant potential for increasing collaboration between state and federal wildlife/land agencies. Because of new and emerging science and policy, state wildlife agencies have better opportunities than ever to shape federal land management, particularly on BLM lands that host many migration routes. These efforts received increased priority this month when Secretary of the Interior Ryan Zinke signed Secretarial Order 3362 calling on his bureaus to work with the states to identify and conserve big game migratory corridors and winter range on federal lands managed by the department.

Through research and new management, Wyoming has advanced approaches to corridor identification, communication, and policy formulation. Now, other states are interested in these tools to advance their management of migration corridors. The goal of the workshops is to facilitate best practices regarding research, management, and conservation of big game migrations through collaboration with state and federal agencies. The workshops are also training wildlife practitioners to use the latest spatial methodologies and tools to identify wildlife movement.

In the workshops, the sponsors bring together representatives and information from the Wyoming Migration Initiative and personnel from the Wyoming Game and Fish Department to describe the process used to map, evaluate, and identify corridors such as the Red Desert to Hoback mule deer migration corridor in Wyoming. The workshops also include discussions about how migration data and science can contribute to the objectives and value of WAFWA’s Crucial Habitat Assessment Tool (CHAT).

The first workshop, which attracted more than 40 wildlife professionals from Washington, Oregon, and California, was held at the Oregon Department of Fish and Wildlife in October of 2017. Attendees remarked on the timeliness and value of the science and policy discussions, as well as the training in the latest spatial modeling techniques. During the first week of June 2018, Nevada, Arizona, and Utah will host a regional workshop in Mesquite, NV. This and other sessions will be expanded to include a second day dedicated to using WAFWA’s Crucial Habitat Assessment Tool (CHAT) with migration data. Additional workshops are currently being planned. For more information, contact WAFWA’s Mule Deer Working Group Chairman, Jim Heffelfinger