Over the last several decades, the availability, connectivity, and quality of early successional forests has rapidly become the limiting factor for a number of at-risk species across the southern Appalachians. The Wildlife Management Institute has worked with partners in other regions of the country to implement young forest restoration efforts, and is now looking to expand the habitat projects into the southern Appalachians. 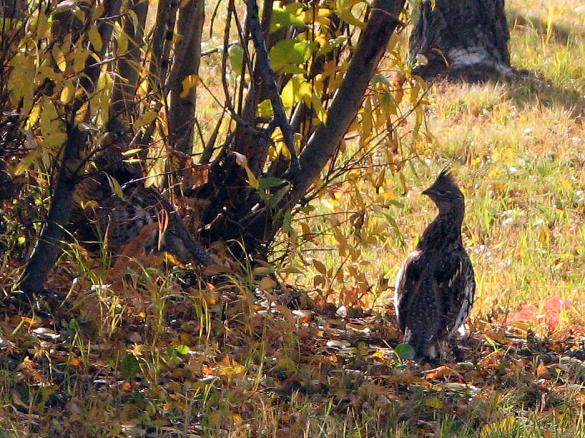 The recent changes in forested landscapes across the Southeast is predominantly human-induced. Many of these changes are the result of commercial development, housing, road-building, etc. that come with continued rapid human population growth throughout the region. However, other factors not directly attributed to a burgeoning human population are also in play.

Timber harvest practices in the southern Appalachians have evolved significantly over the past century. We have seen our southern forests transition from a period of overexploitation in the 1900s, through a period of more responsible harvest strategies up until the early 1980s, to the current period of extensive protest and litigation from environmental groups at the mere suggestion of a timber sale – especially those targeted at our National Forests.

Mining practices that once significantly altered the forested landscape in both composition and design have shifted significantly in the past 20 years. While in some cases these practices had an overall detrimental impact to the landscape and its wildlife, the large, landscape-altering perturbations caused by surface mining for coal were effective in creating large amounts of early successional habitat upon which many species depend. Many lay claim to the demise of surface mining (particularly for coal), however its significant reduction as a landscape-altering practice can most likely be attributed to the boom in fracking for cleaner and less expensive natural gas and the conversion of energy plants that followed.

While farming is neither as productive nor as widespread in the southern Appalachians as it is in other regions of the country, small mountain farms collectively once had significant influence on the amount and availability of early successional forests. As mountain farmlands became unproductive due to over-farming, they were abandoned in the early 20th century for more fertile ground and those areas left became young forests, as shrubs and trees invaded the old fields. Today those old fields are predominantly mature forests, and the continued exodus of Appalachian residents means that the number and size of mountain farms will continue to dwindle.

Likewise, natural forces that removed significant stands of mature forests, such as fires and beavers are largely a non-factor today. Historically, both natural and man-made fires resulted in a continual ebb and flow of many thousands of acres of young forest and shrubland across the Southern Appalachians. However, man no longer lets fires burn unchecked and we have seen a resulting deficit to the early successional component of our mountain landscape. Beavers, with their remarkable ability to block and store water by building dam complexes, historically flooded vast areas of woodland that often resulted in tree death and forest regeneration. Today, the presence of beavers is often classified as a nuisance, and they are quickly removed from areas where they attempt to recolonize.

So collectively, the southeastern mountain landscape now has more mature forest than as recently as 50 years ago. This has resulted in forests that have grown beyond the necessary early successional stage that provides critical habitat for a host of wildlife species ranging from tiny songbirds to large mammals.

A Model for Success

The Wildlife Management Institute, in partnership with many state and federal agencies, NGO partners, military installations, and private landowners is helping to implement a Young Forest Initiative throughout the Northeast. From using Best Management Practices to ensure that the creation and maintenance of early successional forests are optimized both spatially and temporally, to coordinating the efforts of many small and diverse landowners interested in young forest habitat, to securing funding and partnerships that ensure that young forest efforts are viable, affordable, and sustainable, WMI has stood boot to boot with the initiative’s many partners to ensure success. From these efforts, successes include a plan that drove the USFWS decision not to list the New England Cottontail and an increased emphasis and focus on the management of woodcock via the development and implementation of a Woodcock Management Plan.

The efforts in the Northeast have not gone unnoticed by other regions of the country. In particular, the states in the Great Lakes region of the U.S. have created their own Young Forest projects that are largely based off the successes seen in the Northeast. While the focus has been on keystone species such as ruffed grouse, woodcock, aspen and alder regeneration, and others, the partners are well aware of the broad landscape-landscape level impacts that these efforts will have on entire suites of early successional species. The mid-Atlantic states have followed suit as well, with Virginia, West Virginia, Pennsylvania, and New York all initiating projects that benefit early successional wildlife.

Now it is time for the southeastern states to step up to the plate. As a whole, this region, with its extensive coastal plains and associated pine communities, is certainly no stranger to rapid regeneration of forests. However, the mountain regions of the Southeast are where early successional habitat is most difficult to establish and maintain. These habitats have therefore become critical and, in fact, are a limiting factor for many species.

The Wildlife Management Institute stands ready to help with the design, funding, staffing, and implementation for a Young Forest Initiative for the southern Appalachians. Using the models established in the Northeast, Midwest, and mid-Atlantic, we are convinced that a coordinated effort of interested partners can leave an indelible mark on the landscape of this region that will provide critical habitat, with the proper proportions and connectivity, that will not only benefit the recovery and sustainability of many non-game species such as songbirds, reptiles, amphibians, and small mammals, but also benefit many important game species such as ruffed grouse, woodcock, and others that depend on this habitat at some point in their life cycle.