The Ohio Division of Wildlife (ODOW) recently completed a plan to increase conservation relevance to more Ohioans. The plan focuses on improving ODOW’s engagement with, and service to, African Americans and young adults. The Relevancy Consulting Team formed to develop the ODOW plan is currently working with the Missouri Department of Conservation to apply a similar approach to their relevancy planning. The team will soon begin working with Connecticut, Oklahoma, Nevada, and a yet-to-be selected southeastern state under a 2022 Multi-State Conservation Grant to advance those state’s efforts to implement the Fish and Wildlife Relevancy Roadmap. 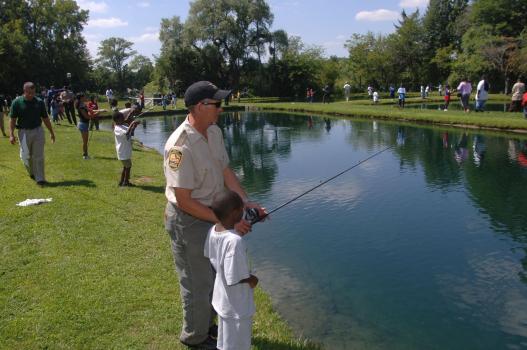 Like leaders in many state fish and wildlife agencies, Kendra Wecker, Chief of the ODOW, and her Executive Planning Group recognized that to fulfill the agency’s mission and its public trust responsibilities, the ODOW needed to engage and serve more of the state’s residents. Seeking expertise on how to do that, Assistant Chief Peter Novotny reached out to Dr. Cynthia Jacobson with Innovative Outcomes for advice. Dr. Jacobson’s PhD focused on state fish and wildlife agency organization and effectiveness and during her tenure with the Alaska Department of Fish and Game and the U.S. Fish and Wildlife Service she gained first-hand experience with the challenges agencies face in their efforts to adapt to the changing social and ecological conditions today.

Phase II was a survey of Ohio residents with an oversample of residents of Toledo and Columbus and African Americans statewide conducted by Responsive Management. The survey provided quantitative data to supplement the qualitative information gathered in Phase I.

Phase III involved a workshop held in Columbus, Ohio, during December 2021 where all the data from Phases I and II were considered. Dr. Jacobson and Chris Smith led ODOW’s Executive Planning Group plus two additional staff members through a process to identify relevancy goals, objectives, actions, and evaluation criteria for African Americans and young adults. The process produced a near-term (2022-2023) relevancy plan with guidance for both external and internal actions. External efforts focus on ways ODOW can develop stronger relationships with African Americans and young adults (ages 18-34). ODOW’s internal actions will address agency culture and capacity related to engagement with historically underserved population segments.

ODOW Chief Wecker said, “Our goal is to adapt and provide what the general public needs to connect with wildlife conservation. We seek meaningful growth combined with our passion for conservation woven into the fabric of our agency’s culture. The Relevancy Team navigated us through challenging issues to help us provide the knowledge and skills our staff need to engage new audiences successfully. Investing time with this team and working through the process has given us the confidence that our next steps will be innovative and beneficial.”

The Relevancy Consulting Team formed to work with ODOW is using a similar approach with the Missouri Department of Conservation to develop their relevancy plans. Phases I and II are complete and Phase III will be the focus of workshops later this month. The team is also initiating efforts with Connecticut, Oklahoma, Nevada, and a yet-to-be identified southeastern state with support from a 2022 Multi-State Conservation Grant. These states’ initiatives add to the growing number of agencies taking concrete steps to increase their relevancy and effectiveness by engaging and serving broader constituencies.