Restoration of plains bison as wildlife in Montana faces an uncertain future after settlement of litigation between the United Property Owners of Montana (UPOM) and Montana Fish, Wildlife, and Parks (FWP) and recent action of the Montana legislature. A settlement agreement signed on March 22nd to end a lawsuit filed by UPOM voided a 2020 bison management plan and stipulates that FWP will not undertake any similar planning process for a period of 10 years. In April, the Montana legislature approved a bill giving county commissioners authority to approve or deny any future proposal to translocate bison as wildlife into their county. Both the litigation and legislation reflect continued opposition to establishment of free-ranging bison in Montana by ranching interests based on concerns related to disease transmission, property damage, and competition for forage. The settlement and legislation preclude FWP from undertaking any efforts to restore bison as a state-managed wildlife species for the foreseeable future. In response, bison advocates are looking to the U.S. Fish and Wildlife Service and the Charles M. Russell National Wildlife Refuge as a way to get wild bison back on the landscape. 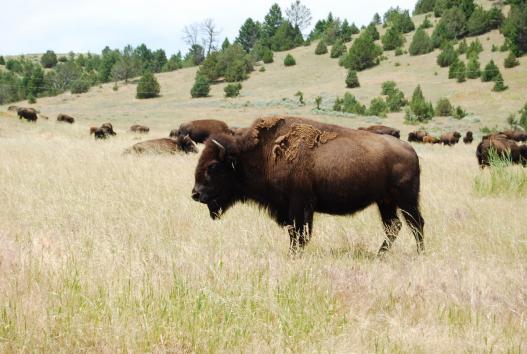 Under previous administrations, Montana FWP worked with the public for over a decade to develop a plan that would guide any decision-making about reintroduction of free-ranging bison as wildlife in Montana. The plan, adopted on January 7, 2020 did not include proposed reintroduction. Rather, the plan specified how FWP would work with local interests to conduct the necessary environmental and economic assessments required by state statutes to inform a final decision by the Fish and Wildlife Commission regarding any proposal from other parties. Ranchers opposed to even the consideration of bison restoration and represented by UPOM filed suit days later in state court to block implementation of the plan. The court did not rule on the case prior to the inauguration of a new governor in January 2021.

Early this year, UPOM approached the new administration with a proposed settlement. In the settlement FWP conceded to all complaints raised by UPOM in the initial filing and agreed that the Final Environmental Impact Statement and Record of Decision for the plan should be vacated and declared null and void. Further, the agreement stipulated that FWP would not undertake any similar planning process for a period of 10 years, unless bison are listed as a Threatened or Endangered Species. Governor Gianforte stated that the settlement would allow a “cooling off period” regarding the ongoing controversy over bison restoration.

The Montana Wildlife Federation and other hunting and conservation groups were disappointed by the administration’s decision to settle the suit and postpone any consideration of bison restoration for a decade. These organizations want to see wild bison restored to complete Montana’s efforts to reestablish all the big game species that were decimated in the 1800s. They also opposed the unprecedented action by the legislature to give counties veto power over wildlife management decisions.

Meanwhile, both the American Prairie Reserve (APR) and Native American tribes are moving forward with restoration of bison to their private and tribal lands in Montana, respectively. APR’s vision is to establish a land base of 3.5 million acres, including the 1.5-million-acre Charles M. Russell National Wildlife Refuge in eastern Montana, to provide for the largest conservation herd in the U.S. APR now owns or leases over 420,000 acres adjacent to and near the refuge and has over 800 bison that are currently privately owned and classified as livestock. APR previously expressed the interest in eventually relinquishing ownership of the bison to the state, so FWP could manage them as wildlife. A spokesman for APR said the recent legal and legislative action would have no impact on their plans to continue to acquire lands and expand their bison herd. In addition, the Blackfeet Nation in northwest Montana is working with several conservation organizations and neighboring tribes in Canada to establish a free-ranging bison herd in the foothills and plains east of Glacier National Park. Other tribes are expanding existing bison herds on the Ft. Belknap and Ft. Peck Reservations.