The Florida Cooperative Fish and Wildlife Research Unit (Florida CRU), a program in the Ecosystems Mission Area at the U.S. Geological Survey, is collaborating with state and federal agencies to assess the success of translocating Florida scrub-jays to bolster the threatened species’ population. When a bird species does not travel long distances and depends upon a particular—and disappearing—habitat, population decline is expected. The Florida scrub-jay, which is known as the most sedentary bird in North America, is experiencing this exact dilemma. Yet, new findings uncovered at the Florida CRU have shed light on the sustainability of current and innovative conservation methods for the threatened bird. 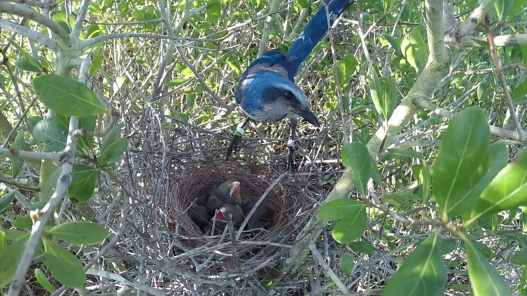 The oak scrub and flatwood plant communities Florida scrub-jays rely on are vanishing because of increased residential development, which converts or fragments habitat and prompts fire suppression. The non-migratory bird is found solely within the bounds of the Sunshine State and their limited home ranges and inability to disperse far means the birds are unable to naturally replenish outlying populations. As a result, scientists are intentionally relocating individual Florida scrub-jays to preserve the species; this method is known as translocation.

Cardas evaluated the benefits certain Florida scrub-jays add to their population based on their social role to understand the impacts of removing these individuals. This research will inform Florida scrub-jay management by deciphering which specific birds are best to relocate to minimize adverse effects on the donor population. She worked in cooperation with avian scientist Dr. Karl E. Miller of the Florida Fish and Wildlife Conservation Commission (FWC), who measured the impacts at the recipient sites, to gain a comprehensive understanding of how translocation holistically influences the species.

“We really felt that in order to gauge the level of success for a translocation it needed to include the outcomes at both the recipient and donor sites, in order to get a more complete picture of the project,” Cardas explained.

Some Florida scrub-jay breeding pairs are assisted in raising their current nestlings by one, or more, of their offspring from prior breeding seasons. These juvenile jays, deemed “helpers”, support their parents by feeding their newest brothers and sisters. Additionally, this family unit defends their territory year-round. Translocation traditionally focused on moving intact family units so the group can better defend itself when released at the new location. However, translocating families is difficult and may not be sustainable. Thus, Florida scrub-jay researchers turned their focus to translocating helpers. They pair them with unrelated helpers of the opposite sex to be released at the new location together, hoping they will start a family of their own.

This study determined how translocating helpers impacts donor populations by monitoring nesting success and productivity of Florida scrub-jay families with and without helpers. A nest is considered successful if one egg hatches, and productivity is defined as the number of juveniles that have fledged the nest.

“If there is evidence that helpers do not increase nest success in ONF, then future translocations may be able to focus on the removal of helpers as opposed to translocating entire family groups,” said Cardas.

Although it was anticipated that helpers enhance overall reproductive success because they feed the nestlings, the data did not indicate any added benefits to the chicks. It was predicted that breeding pairs with helpers would have nestlings that weighed more, lived longer, and were fed more often. However, comparing two years of data among three family group dynamics (groups with helpers, groups without helpers, and groups where helpers had been removed) proved otherwise.

Camouflaged GoPro cameras were installed at nests when nestlings were between 8 and 10 days old. This footage tracked provisioning rates, or the number of feedings per nestling per hour. The data showed that there was no correlation among helpers causing higher provisioning rates, nestling weights, and daily survival rates, suggesting that translocating helpers can continue without negatively impacting nest success in ONF. Eleven-day-olds were weighed, banded, and had blood samples taken for future data collection purposes. This information contributes to the statewide monitoring of the species for tracking survival, population demographics, and dispersal of Florida scrub-jays.

The ONB features articles from U.S. Geological Survey Cooperative Fish and Wildlife Research Units across the country. The Units are leading exciting, new fish and wildlife research projects that we believe our readers will appreciate reading about. This story was written by Katrina Rossos, graduate student at the Florida Cooperative Fish and Wildlife Research Unit at the University of Florida.