Snow is returning to the high country across the West triggering deer, elk, and pronghorn to start their annual migration to winter ranges. Seasonal movements that may be over one hundred miles long, and wintering areas where forage is accessible and thermal stress is lower, are critical to these species’ survival. Unfortunately, increasing development across the West creates barriers to migration and displaces wildlife from winter ranges which can result in significant declines in wildlife populations and the benefits they provide to people. In response to a Secretarial Order issued last February, state fish and wildlife agencies and the Department of the Interior (DOI) are working rapidly to identify and address threats to big game migration corridors and wintering habitat across the 11 coterminous western states. 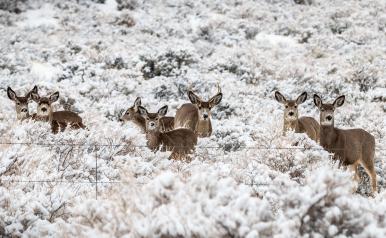 Secretary of the Interior, Ryan Zinke, issued Secretarial Order 3362 to improve habitat quality in western big game winter range and migration corridors. The Order reflects DOI’s recognition of the importance of healthy big game populations to both the economy and lifestyle in the West, while also recognizing that conservation actions focused on big game will most certainly benefit a host of other wildlife species. Importantly, the Order clearly recognizes state authority to conserve and manage big game species.

The Order directs staff in DOI bureaus to work closely with states to evaluate how land under each bureau’s management can contribute to improving the quality of big game winter range and migration corridors. This includes using state data early on in land use and project planning and applying site-specific management actions to sustain big game populations by restoring winter range or corridor habitat conditions, revising wild horse and burro management to reduce competition for forage, working with private land owners and transportation departments to reduce barriers to migration such as fences and highways, and avoiding or minimizing development and disturbance in winter range or corridors.

Since the Order was signed, the Department and its bureaus, working closely with state fish and wildlife agencies, have been moving rapidly to implement the directive. The Order called for identifying a Coordinator and field-based liaisons. Reaching out to each of the 11 states, the Coordinator sought corridor, winter range, and stopover area priorities as well as associated research priorities. Using priorities received from all 11 states, the liaisons assembled an “Action Plan” for each state developed in close consultation with each state’s fish and wildlife agency. The plans, which were approved in late October, identify the top three to five priority winter ranges, migration corridors, or stopover areas and conservation activities needed, as well as the highest priority data “gaps” where information is inadequate to document migration corridors. These action plans are now being used to direct both DOI bureau action and allocation of federal funds to protect and enhance winter range and migration corridors.

On the research side of the equation, the DOI took immediate action and is providing some $2.8 million to fund the priority research needs identified by the 11 respective states. Consequently, each state will have their priority research projects funded up to a $300,000 cap as identified through the implementation of the Order. For example, in early October DOI announced that the BLM and the U.S. Fish and Wildlife Service would allocate $265,000 to the Arizona Game and Fish Department (AGFD) and $230,000 to the Utah Division of Wildlife Resources to support their top research needs.

The AGFD will use a portion of their funding to track mule deer movement where the new Interstate 11 is being planned to connect Las Vegas and Phoenix. Twenty deer in three study areas (60 deer total) near the planned highway will be collared to map their migration patterns. This is Arizona’s top research priority and will allow the state to work with the Department of Transportation during the planning process rather than after the highway is constructed. In addition, the funding will be used for research projects on the SR77 Overpass between the Catalina Mountains and Tortolita Mountains and the San Francisco Peaks area, as well as to gain a better understanding of migration corridors in relation to a high volume of annual road kills on SR89 east of the San Francisco Peaks and on movement corridors related to exurban development.

In Utah, the funding will be used by the Utah Division of Wildlife for their three top research priorities including evaluating the impact of highways and increasing housing development, as well as identifying corridors or better defining winter range due to concerns associated with rapid growth and housing development, highways, and juniper encroachment. The state’s top research priority will be to collar 40 mule deer (20 does, 20 bucks) from the herd that migrates down from the Oquirrh Mountains to winter range in the Lake Mountains, crossing the state highway that connects the City of Eagle Mountain with the Salt Lake and Provo areas. The other two Utah priority projects will collar 80 mule deer in the Zion and 60 mule deer in the Chalk Creek/Kamas Wildlife Management Units to document seasonal ranges and migration corridors for these herds that number 15,000 and 20,000 deer respectively.

“Utah is one of the fastest growing states in the nation. With this rapid growth we need to be nimble and progressive in our management and restoration programs to provide habitat and migration corridors for big game,” said Mike Fowlks, Utah Wildlife Division Director. “Secretarial Order 3362 has been an incredible shot in the arm by helping us address several urgent research needs for big game in Utah. Information collected from these studies is being used to map migration corridors and plan projects, such as wildlife crossings, that will preserve big-game movements for generations to come. I cannot stress enough how much the Secretarial Order can help the state of Utah maintain abundant populations of deer, elk, and pronghorn.”

On the habitat side, the National Fish and Wildlife Foundation (NFWF) recently published a request for proposals for up to $2.7 million of funds provided by the BLM, FWS, and ConocoPhillips to enhance the quality of state identified, priority big game winter ranges and migration corridors.

“Healthy and protected migration corridors are essential to the future of a wide range of big-game species across the West,” said Jeff Trandahl, executive director and CEO of NFWF. “By working closely with our partners at the Department of the Interior, and with the support of ConocoPhillips, we will expand funding opportunities for conservation projects that will make a real difference for these big game species.”

The new NFWF grant program requires that all proposals specifically address how projects will directly address state-identified priorities to conserve or restore habitat and measurably contribute to the sustainability of local and regional big-game populations. Proposals must accomplish program priorities which include: