Exotic plant species are a major concern for the conservation of native wildlife and ecosystems throughout the world. The Massachusetts Department of Conservation and Recreation (MDCR) recently began work to eradicate non-native conifer plantations that remain on the lands and watersheds that they manage. Prior to beginning the work, the U.S. Forest Service and the U.S. Geological Survey's Massachusetts Cooperative Fish and Wildlife Research Unit embarked on a research project to evaluate the biodiversity of the Norway spruce plantations using birds as an indicator species. 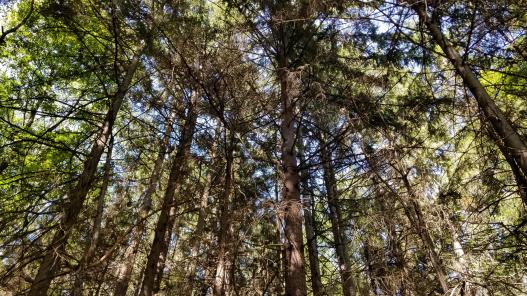 Non-native plants can replace native species, alter ecosystem structure and function, and impact native wildlife populations. Virtually all plant communities are affected, including native forests, which also face a myriad of other assaults such as land conversion, development, wildfire, and pollution. Globally, natural forests are also being replaced by planted forests, which often lack the complex structure, diversity of plant species, and ecosystem functions of natural forests.

Among non-native conifer species, Norway spruce plantations remain widespread across the northeastern United States. The impacts these plantations have on native wildlife are not fully understood, and best practices for managing them to promote biodiversity are often unclear. At first look, the idea of eliminating non-native plantations in favor of naturally growing, native forest seems an easy management decision. However, conservation issues are not always that straight-forward. In Massachusetts, the decline of eastern hemlock (due to the invasive hemlock woolly adelgid, as well as elongate hemlock scale) lends urgency to the need to preserve conifer dominant habitat. Understanding how Norway spruce supports wildlife species relative to native forest stands is key to determining how these exotic plantations should be managed.

In 2016, MDCR contacted the U.S. Geological Survey’s Massachusetts Cooperative Fish and Wildlife Research Unit (Coop Unit) and the U.S. Forest Service’s Northern Research Station (USFS) to initiate a study to compare biodiversity among Norway spruce plantations and various native forest stand types using birds as indicators. The comparison between spruce and hemlock was of particular interest due to the structural similarities between the two, and the potential for spruce to support species commonly associated with declining hemlock habitat. Calvin Ritter, M.S. candidate in the Department of Environmental Conservation at the University of Massachusetts-Amherst, led the field and data collection efforts, advised by Dr. Stephen DeStefano (Coop Unit) and Dr. David King (USFS).

According to the results, Norway spruce plantations in Massachusetts supported bird species and communities like those of surrounding native stands. Species richness within spruce plantations was not significantly lower when compared to native forests, including hemlock stands. Multiple hemlock associated species, such as black-throated green warbler, Blackburnian warbler, and red-breasted nuthatch, were commonly observed utilizing spruce plantations, with the latter two being more abundant in spruce than in hemlock. Additionally, golden-crowned kinglets were commonly observed in plantations, despite being nearly absent from nearby native forest stands. Spruce and hemlock stands were both characterized by similar habitat features such as dense canopies and sparse herbaceous layers. Both spruce and hemlock stands also exhibited relatively narrow daily thermal ranges compared to other forest types, suggesting that spruce plantations could offer thermal refuge for birds and other taxa, especially during periods of warming temperatures.

Given these findings, land managers could be justified in allowing Norway spruce to persist within the landscape while still maintaining avian biodiversity. It is important to note, however, that additional plantations of either non-native or native species are not planned and will not be planted. Rather, existing stands of Norway spruce will be allowed to transition into native forest over time.

The ONB features articles from Cooperative Fish and Wildlife Research Units across the country. The Units are leading exciting, new fish and wildlife research projects that we believe our readers will appreciate reading about. This graduate research study was designed to provide science-based information to our state wildlife and land management agencies, who were then able to apply our findings to on-the-ground forest management. Calvin Ritter is an MS student in the Department of Environmental Conservation at the University of Massachusetts Amherst and is advised by Stephen DeStefano, Unit Leader at the USGS Massachusetts Cooperative Fish and Wildlife Research Unit