Wildlife conservation depends on understanding the species in each region, including the status and distribution of individual species within a given range. Each species has its own habitat and management needs; therefore, the natural history of each species must be studied. Sometimes, during inventories and natural history observations, cryptic species are discovered. These are species that are represented as one individual species when in fact they should be split into two or more species that are morphologically similar but phylogenetically distinct. Conservation decisions for newly discovered cryptic species will depend on ecological differences among the similar species as well as how easily the species can be correctly identified as distinct. Recent research, funded through the Regional Conservation Needs Grants Program, assessed the population distribution and conservation status of the three species of leopard frogs in the northeastern United States. 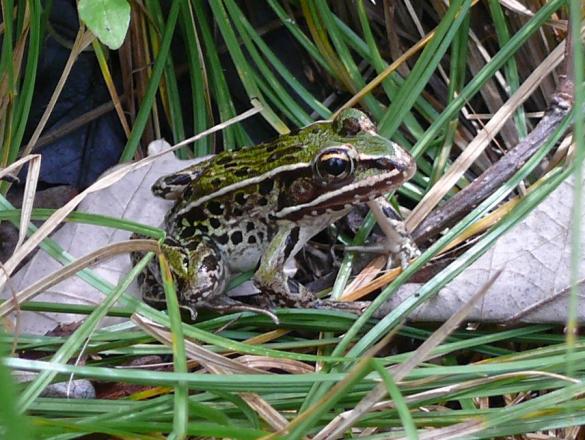 The study was conducted in the northeastern portion of the Atlantic Coastal Plain, from southern New York and Massachusetts to northern North Carolina. Call and visual surveys were used to identify populations of each species, and tissue samples were taken for genetic analysis. The sampling resulted in the identification of 111 R. kauffeldi, 79 R. sphenocelphala, and 72 R. pipiens. Analysis of the study focused on R. kauffeldi, though the results provide specific habitat management considerations by species, with important differences in management by location. R. kauffeldi was confirmed in eight eastern states (CT, NY, NJ, PA, DE, MD, VA and NC), though the species has disappeared from much of its historical range in NY and CT. For the full study, please visit the project page on RCNgrants.org.