Wildlife Forever released a report that ranks congressional districts in the West by their “infestation score” for nonindigenous aquatic species (NAS). The “Battle of the Bads” documents where these harmful invasives are affecting aquatic ecosystems. 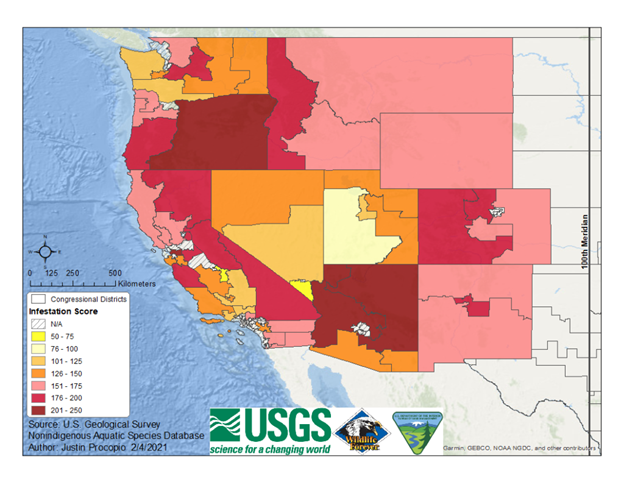 The organization worked with 12 professional biologists to rank their top 20 most harmful NAS out of a list of 104 species. From that list Wildlife Forever pulled the 25 ranked highest, and asked the biologists to re-rank only based on those top species. From that list, they assigned a harm score based on their rank within the top 25 with the most harmful receiving a score of 25. This method ranked the top five most harmful nonindigenous aquatic species as 1) quagga/zebra mussels (HS=25), 2) Eurasian milfoil (HS=24), 3) rusty crayfish (HS=23), 4) New Zealand mudsnail (HS=22), and 5) silver carp (HS=21). A full list of species with a map showing current distribution is available on Wildlife Forever’s website.

Wildlife Forever then used maps from the U.S. Geological Survey (USGS) from the Nonindigenous Aquatic Species Database, authored by Justin Procopio under the supervision of Wesley Daniel of the USGS, to estimate where the species was prevalent to a “major” or “minor” extent. A species’ full Harm Score was assigned in cases of ‘major’ prevalence and half a species’ Harm Score in cases of ‘minor’ prevalence. The ultimate “Infestation Score” by district was determined by the sum of all species prevalent, weighted by each species’ Harm Score.

“Wildlife Forever views the Battle of the Bads! report to be a conversation starter, not a definitive ‘last word,’ on aquatic invasive species in the West,” said Tim Richardson, Wildlife Forever government affairs rep. “State and federal natural resource agencies are under-funded. Lawmakers who vote for low conservation funding while ignoring invasive species in their home districts erode the health of the nation’s ecosystems. The Battle of the Bads! report will show that to most of them for the first time.”