At the 87th North American Wildlife and Natural Resources Conference last month in Spokane, Washington, Wildlife Management Institute (WMI) staff hosted a special session with speakers representing state agency relevancy-related projects. The speakers during The Hitchhiker’s Guide to Relevancy: Tips from Trailblazers session represented four states, offering their experiences and practical advice from multiple scales of implementation—from an internal, one-person program to an agency-wide scale reaching out to diverse constituencies. While the speakers acknowledged the challenges that the pandemic created for their projects, they have made significant progress. Their work reflects the core reason the Fish and Wildlife Relevancy Roadmap was written the way it was: A comprehensive collection of strategies in need of testing through application to document their utility/effectiveness (or not) at engaging broader constituencies. The session’s trailblazers recognized the need to test applications of understanding and developing relationships with partners that would lead to successful delivery of improved conservation outcomes. 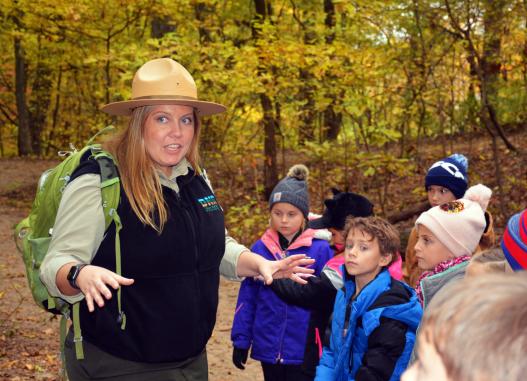 All of the speakers shared what they have learned while navigating the internal and external challenges of reaching out to new audiences. Elizabeth Middleton (Indiana Division of Fish and Wildlife) offered her experience and advice about increasing relevancy in a one-person program and how change requires exposure, opportunity, and support. She emphasized the importance of being exposed to concepts and the application of relevancy-related projects but also the importance of having other people to talk to from other programs and agencies and learn from them about relevancy project implementation. She noted that the AFWA Wildlife and Nature Tourism Working Group was a good example of relevancy in action. Elizabeth emphasized the importance of being provided the opportunities to explore the concepts of relevancy, building a hypothesis, and experimenting with its application. She also emphasized the need for support—coaching to develop a hypothesis and design interventions for change and to provide expertise and knowledge that staff may lack. She challenged the audience to consider if they were exposing staff to information about the need for relevancy, if they were providing opportunities to experiment with relevancy projects, and providing the many kinds of support that staff need to have the confidence, coaching, and resources to create a path forward that would engage and serve broader constituencies.

Director Keith Warnke (Wisconsin Division of Fish, Wildlife and Parks) outlined how relevancy fit into their existing strategic plan and agency mission. The Wisconsin team acknowledged the need to adapt to changing social conditions and help Wisconsin residents become more aware of, value, and support conservation in multiple ways. He also noted the importance of their traditional user groups and constituents to take pride in their relationship with and support of the agency’s core activities and responsibilities, while also supporting efforts for growing their customer base through existing and future programs. He emphasized the importance of the team understanding why the agency was taking on this work, the persistence of their leadership team, and the value of good facilitation to keep the work moving forward. His advice was to communicate about the efforts at many levels. The team wished they had some examples to help them get started but the most important thing was just to get started.

Jason Sumners (Missouri Department of Conservation) described his agency’s journey into the unknown realm of relevancy. He noted that part of MDC’s mission statement includes the need for MDC to facilitate and provide opportunities for all citizens to use, enjoy, and learn about these resources. In MDC’s Community Conservation Program Review, they noted the need for a dedicated position to focus on relevancy—and then went a step further to create a Relevancy Branch that would elevate the agency commitment to understanding and meeting the needs and interests of all the state’s constituencies. Jason’s advice was to not expect immediate succuss, focus your efforts on prioritized initiatives, create the space and time to have reflective discussions, be innovative and don’t be afraid to try new things, provide staff with the resources to implement new initiatives, and plan to build in evaluative components to initiatives to measure progress.

Director Ryan Brown (Virginia Department of Wildlife Resources) emphasized their partnership with Rob Sassor and his team at Metropolitan Group as they discover a new path to relevancy. This partnership is significantly enhancing DWR’s ability to engage and cultivate relationships with new constituencies, and increase these constituencies’ engagement with, connection to, and support for the agency and fish and wildlife conservation. DWR is prioritizing their relevancy work in better understanding the needs, interests, and concerns of two tribal nations and a local chapter of Outdoor Afro. They noted that the journey to relevancy is a non-linear path and they noted a long list of things that could push you off the path and advice on how to find your way back to the path. One example they offered was that an agency’s partial or flawed understanding of a constituency’s history, context, or concerns could be mitigated by intentionally recruiting staff from that constituency, providing cultural respect and responsiveness training, and acknowledging the agency’s part in shared pasts and vested interests. Another way to veer off course is to compartmentalize this work; this can be mitigated by integrating the work across the agency. Their parting advice was to take the time to build relationships first, understand each other’s understanding of needs and interests in fish, wildlife, and conservation, and then co-create desired services and experiences together.

These trailblazers are providing examples of experimentation with implementing projects and programs that will improve conservation outcomes by engaging with broader constituencies. They provide lessons learned about where to start, what is likely to work, what to focus on first, and how to stay on the path to relevancy. A recording of this special session can be found at WMI’s Relevancy Community of Practice website.