The ecological benefits of rivers and riparian lands are well researched and recognized by conservationists. The potential risks of flood-related damage to people and infrastructure in these areas, especially under some climate change scenarios, make it crucial for land managers to be able to identify the areas where river related processes occur. There are currently several methods land managers use to delineate river and floodplain areas. Most methods incorporate data that can be time intensive to acquire or require user input. 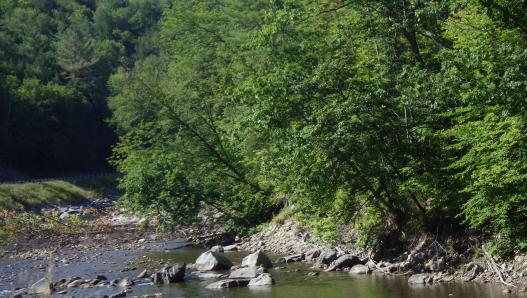 Researchers at the University of Massachusetts, Amherst have developed a novel approach for delineating the River Process Corridor (RPC) which they define as “the area adjacent to a river that is likely to affect and be affected by river and floodplain processes.” Called the River Corridor Modular Assessment method, it is designed to be objective and quick to implement, using transparent and easily accessible data that requires low levels of expertise. The RPC was designed for the North Atlantic region, which spans from Virginia to Maine.

The method is composed of five functional process units: 1. The Flood Processes Unit; 2. The Landslide and Steep Terrain Processes Unit; 3. Wetland Processes Unit; 4. Channel Migration Processes Unit; and 5. Riparian Ecologic Processes Unit (to the researchers’ knowledge, the wetland process and steep terrain units are novel additions not used in previous delineation methods). It can be applied to multiple spatial scales but is also modular and can be adapted to specific locations.

There are three case studies the researchers used to test the RPC. The first is the Upper Connecticut River watershed on the border of Vermont and New Hampshire, a site used to show how the different layers of mapped process units are added together in the RPC and to test the model in an area of known river migration. The second site is the Baker River in the White Mountains of New Hampshire. Here the RPC was tested on a rapidly shifting river channel where there is abundant imagery of the channel location through time. The third site is the White River watershed in central Vermont, which is an area that experienced extreme flooding during Tropical Storm Irene in 2011. The RPC is generated with data from before the flood to see how well it predicts the location of landslides and deposition zones during the flood. The results of the tests show that the RPC is an effective tool for watershed and reach scale analysis. The RPC encompassed all historic channel locations of the actively migrating sections tested on the Connecticut and Baker Rivers. In the White River, the RPC predicted 87% of areas susceptible to floodplain sedimentation and 93% of areas susceptible to landslides. The RPC has the potential to demarcate potential important areas in conservation and flood prone areas in the Northeast region, an area expected to have more flood events as the climate changes.

A detailed paper describing the development and background of the method for delineating the RPC, a step by step guide for using the method, and the specific case studies testing the effectiveness of the RPC is publicly available online. This work is funded in part by the U.S. Fish and Wildlife Service, Interior Region-1 (North Atlantic-Appalachian Region).