Warming waters are already affecting where inland fish across North America reproduce, grow, and where they live. For many anglers, and for local and state economies, these changes could spell trouble. Together, scientists from the USGS Missouri Cooperative Fish & Wildlife Research Unit (Missouri Unit) and the 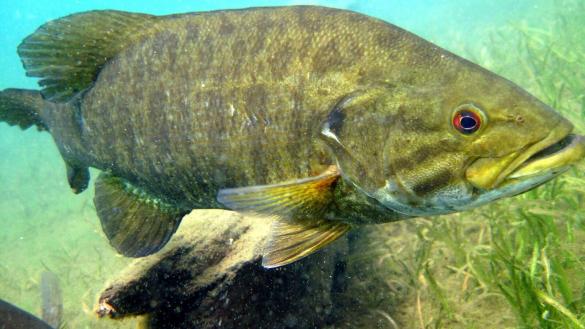 A survey conducted by the U.S. Fish and Wildlife Service found that in 2011, 27.5 million U.S. residents went freshwater fishing. These anglers took about 369 million fishing trips and spent $25.7 billion on those trips. In the future, however, based on USGS-led studies of predicted effects of climate change on fish species distribution, anglers may have to fish for different species in their favorite fishing places, or travel to different areas to find the same fish.

To best manage fish populations and encourage fishing in a changing climate, resource and fisheries managers need a deep understanding of how both fish and anglers will respond to the effects of climate change. Providing scientific information to support this understanding is paramount – albeit challenging.

The good news is that research has started and is ongoing.

In 2015, for example, the Missouri Unit and NCCWSC brought together experts to begin to develop a broad understanding of the effects of climate change on fish and fisheries in North America. Results of the workshop discussions and related research were then published in 2016 in a set of four papers in a special issue of the journal Fisheries.

As part of this work, scientists conducted a review of 31 studies that document the impacts of climate change on individual fish species, populations, anglers, and fisheries managers across North America. One of the key takeaway messages from that work is that climate change effects on fish are rarely straightforward.

Fish that have the most documented risk, the researchers found, include those living in arid environments. As the frequency and severity of droughts is expected to increase in the future in many parts of North America, especially in arid rivers, water levels could decrease, affecting fish habitat and connectivity between streams.

Meanwhile, changing water temperatures can also cause suboptimal habitat for some fish; warmer water, for example, can stress coldwater fish. When stressed, fish tend to eat less and grow less, altering their ability to compete to survive. Sockeye salmon, for example, are a coldwater species experiencing well-documented shifts in range, abundance, migration, growth, and reproduction.

Climate change is also shifting the range and migration patterns of other species; in some cases, these changes are even creating more suitable habitat. It’s important to emphasize that these changes can result in new species interactions and alter predator-prey dynamics. For example, smallmouth bass have expanded their range and warmer waters have increased the availability of their prey fish, making the bass more competitive against other top predators, disrupting native food chains. In the Rocky Mountains, non-native rainbow trout are expanding into coldwater streams and mating with the native westslope cutthroat trout, creating hybrid fish.

To make matters even more complicated, the effects caused by climate are interacting with other human-related factors such as agricultural run-off and water use, making the direct cause of such changes especially difficult to determine and measure. The findings from this work, and other USGS-led projects across the country, help provide a more comprehensive picture of the impacts of climate change on our country’s treasured fish and freshwater habitats.

The ONB features articles from Cooperative Fish and Wildlife Research Units across the country. Working with key cooperators, including WMI, Units are leading exciting, new fish and wildlife research projects that we believe our readers will appreciate reading about. This article was prepared by Holly Padgett, Program Analyst, NCCWSC, and was adapted from a 2016 USGS feature story, In Hot Water: Climate Change is Affecting North American Fish. NCCWSC is the managing entity for the eight regional Department of the Interior Climate Science Centers (CSCs). Together, NCCWSC and the CSCs aim to provide natural and cultural resource managers with science and tools related to the impacts of climate change on fish and wildlife.