The Future of Bison in Montana?

The Future of Bison in Montana?

Montana Fish, Wildlife, and Parks (MFWP) is caught between a rock and a hard spot – or perhaps more accurately between an immovable object and an irresistible force. The immoveable object is resistance from the Montana Legislature and some in the livestock industry to the restoration of wild, free-ranging bison. The irresistible force is the ongoing efforts of several Native American Tribes and the American Prairie Reserve (APR) to restore bison’s ecological, cultural, and spiritual roles in Montana. Only one thing is certain about the future of bison in Montana, the species will continue to stir passion and controversy. 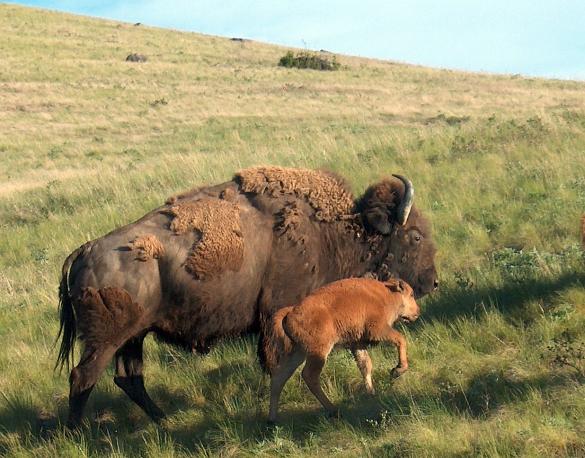 In September, 2014, eight U.S. Tribes and Canadian First Nations signed the Medicine Line Northern Tribes Buffalo Treaty, documenting their commitment to the Iinnii Initiative. The initiative is a joint venture of the transboundary Blackfoot Confederacy and the Wildlife Conservation Society to restore the ecological, cultural and spiritual role of bison on tribal lands in northwestern Montana and southwestern Alberta, Canada. Over 20 Tribes have now signed onto the treaty.

Under the initiative, the Blackfeet Tribe in Montana has established a small but growing herd of bison obtained from Elk Island National Park in Alberta. To date, the bison have been held in an enclosed pasture, but the tribe is planning to release the animals in the near future onto unfenced tribal lands. The goal is to establish a herd that moves across reservation lands in the U.S. and Canada, as well as Glacier National Park. If successful, it is only a matter of “when” – not “if” – the bison range off the reservation or park lands onto other public, state or private lands. Such movements would raise a number of complex questions regarding ownership, jurisdiction, management responsibility, and liability for damages. Transcending the U.S./Canada border (the “Medicine Line” to tribes), the Iinnii Initiative brings international elements into the mix.

In northeastern Montana, tribes on the Ft. Peck and Ft. Belknap reservations have also established herds of several hundred bison on their lands and are looking to expand their numbers. Tribally owned bison on Ft. Belknap have occasionally broken through fences and wandered onto adjacent ranchlands, resulting in conflicts until the bison can be herded back onto the reservation.

In addition to these tribal efforts, the American Prairie Reserve (APR), a private, non-profit organization, is pursuing a vision of establishing a herd of up to 10,000 bison on 3.5 million acres of public and private lands, including the Charles M. Russell National Wildlife Refuge (CMR). To date, APR has purchased nearly 400,000 acres of private and deeded land in counties surrounding the CMR and established a herd of over 1,000 bison. Although APR’s privately-owned bison are classified as “livestock” under Montana law, eventually APR hopes to relinquish title to their animals and turn responsibility for the bison over to MFWP to manage as public “wildlife.”

At the recent “Buffalo Unites Us” conference in Polson, MT co-sponsored by the Confederated Salish and Kootenai Tribes, National Wildlife Federation, Wildlife Conservation Society, American Prairie Reserve, University of Montana Indian Law Program and the Turner Endangered Species Fund, proponents for both tribal and non-tribal efforts to restore bison voiced strong support to advance these initiatives. Professor Monte Mills, who teaches Indian Law at the University of Montana, argued that the federal government may have an obligation to restore bison as part of its trust responsibility to Native Americans. Paul Santavy, Refuge Manager for the CMR, said the refuge also supports restoring bison and encouraged the state to move forward in conjunction with the APR to get “hoofs on the ground.” Santavy said that, like with the reintroduction of wolves to the northern Rockies in 1995, establishing even a small herd in a place like the CMR would change the dialog from a “Yes/No” impasse to discussion about real-world management issues. MFWP Director, Martha Williams, acknowledged the sentiment of the audience, but also pointed out that the Montana Legislature has a dominant role in decisions about the future of bison in the state.

The future of bison in Montana has been debated in the past five biennial legislative sessions. Bills have been introduced to prohibit MFWP’s ability to establish a free-ranging herd of bison, to classify all bison in Montana as livestock, or to transfer management of all bison to the Department of Livestock. These legislative proposals are based, in part, on concerns about the potential for transmission of brucellosis from bison to cattle if the source population is from Yellowstone National Park where the disease in endemic in bison and elk. Potential conflicts between free-ranging bison and private property, public safety, and agriculture fuel opposition regardless of the source. Absent vetoes by Governors Schweitzer and Bullock, some of the most restrictive bills would have become law.

Caught between supporters and opponents, MFWP initiated a programmatic Environmental Impact Statement in 2012 to explore issues related to bison restoration. As part of that process, MFWP created a “Bison Discussion Group” that brought representatives from a range of interests to the table to identify the challenges and seek broadly acceptable solutions to restoring bison to the landscape. Although the working group reached agreement on many points, some of which were incorporated into a draft EIS released in 2015, and in Senate Bill 212 which defines the steps FWP must follow if considering establishing a free-ranging bison herd and became law in 2017, MFWP has not yet issued a record of decision on the EIS.

At some point, however, something will have to give. The legislature can constrain MFWP’s involvement in bison restoration, but as sovereign Nations, the tribes can move ahead with their initiatives. If Professor Mills’ argument that the federal government owes a duty to tribes has merit, that may accelerate tribal efforts. Similarly, APR can continue to buy private land and associated grazing leases and build up their herd. It is also possible the U.S. Fish and Wildlife Service could initiate restoration efforts on the CMR, on their own or along with the APR, without state involvement.

Speaking at the “Buffalo Unites Us” conference, WMI Western Field Representative Chris Smith urged the parties to get back to the table and finalize a state-led decision. Smith said, “The worst-case scenario is that a significant tribal herd moves off the Blackfeet Reservation onto adjacent public or private land without prior planning and agreement among all the parties involved regarding how to manage that inevitability. There are deeply held values and difficult questions that must be addressed through honest and frank negotiation. Montanans have shown they have the ability to work through the challenges of restoring wolves and grizzly bears to the landscape. The question is, ‘Is there the will and the time to do that with bison?’ The clock is ticking.”