As the number of states facing Chronic Wasting Disease (CWD) in both free-ranging deer and on deer farms keeps increasing, individual states are looking more closely at regulations to restrict movement of CWD through both live deer and deer carcasses. There is no rapid test for CWD infection and diseased animals are slow to show symptoms; both live animals and carcasses that are infected with the disease can be moved from one location to another. Both Michigan and Wisconsin have made recent changes intended to help slow the spread of the disease. 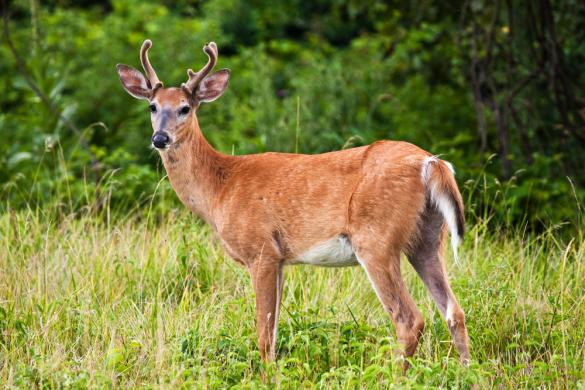 In May 2018, Wisconsin Governor Scott Walker directed the Wisconsin Department of Natural Resources to develop regulations preventing the movement of intact harvested deer from identified CWD-affected counties. Under the rule, hunters can still quarter the deer within the county it was harvested and then take the meat anywhere in the state, but no portion of the spinal cord may be attached or moved. A hunter who harvests a deer in a CWD-affected county may only move a whole carcass outside of the county if the carcass is delivered to a licensed taxidermist or meat processor. In addition, the Governor directed the creation of a new rule banning the movement of live deer from deer farms in CWD-affected counties.

In 2017, Michigan banned the importation of intact carcasses of any white-tailed deer, mule deer, elk or moose from other states. Any meat brought into the state must be deboned, and any antlers still attached to a skull plate must have all brain and tissue cleaned out. Because CWD is a neurological disorder, this means the disease has the potential to be carried in the skull of a caped-out animal. Scientists agree that the real issue here is that many hunters, upon processing the animal, have improperly disposed of carcass remains that may introduce CWD prions into the state.

Minnesota’s Office of the Legislative Auditor (MOLA) released a report in April, 2018 stating that the Board of Animal Health (BAH), responsible for protecting the health of Minnesota’s domestic animals, including deer and elk, has failed to enforce some deer and elk regulations concerning the deer farming industry. MOLA recommended that the BAH should (1) ensure producers follow Minnesota deer and elk laws, (2) strengthen consequences for producers, and (3) monitor field staff performance. MOLA also recommended that the BAH should (1) systematically analyze CWD-testing compliance, and (2) appropriately penalize those producers who fail to submit CWD-testing samples. MOLA also pointed out the need for increased communication of the BAH with Minnesota’s DNR in fighting CWD.

The CWD Alliance maintains a website that provides information about carcass transport regulations across the country. As many states are in the process of updating fall hunting regulations now, information on the website will be updated before the fall hunting seasons begin.