The Utah Cooperative Fish and Wildlife Research Unit is partnering with the Bureau of Reclamation and the Utah Division of Wildlife Resources to protect and recover endangered and imperiled fish species in the Colorado River Basin. Population estimates of razorback suckers are critical to determining the effects of management actions and ultimately lead to decisions on whether the fish can be recovered and/or delisted. However, accurately detecting fish moving through rivers and streams is difficult and costly. The overall goal of this project is to assist with developing methods and analyses techniques to improve survival, population, and movement models for endangered fish species in the Colorado River Basin. Utah Public Radio at Utah State University featured this story by Shauna Leavitt on June 2, 2019. 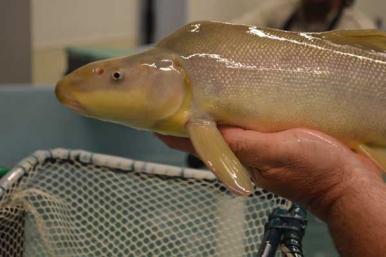 Just outside Moab between the cold, fast-flowing water of the Colorado River and the slow, warmer waters of the Matheson Wetland Preserve stands a newly constructed escape passage for larvae of the endangered razorback sucker.

The fish nursery was built to provide the newly hatched razorbacks a way to escape the appetites of the large predators in the Colorado River.

The tiny “noodle-like” larvae enter the passage, swim through a screen which holds the predators back, then live a peaceful few months in the safe, nutrient-rich water of the preserve.

The larvae will stay in the Matheson Wetland preserve during the summer to grow and gain strength. When water levels drop, the razorback young will be moved back into the Colorado River when they are much larger and have a better chance of survival.

The razorback sucker has lived in the Colorado River for thousands of years and has adapted to Utah’s warm turbid desert waters and rivers.

But during the twentieth century, the Razorbacks faced two threats: the growing population of non-native predator fish that consume the Razorbacks, and the changing flow regime in the Colorado River Basin due to increasing water demand and development. These two threats decreased the Razorbacks’ ability to maintain a sustainable population, which eventually led to the listing of the sucker as a federally endangered species.

Katie Creighton, the native aquatics project leader with the Utah Division of Wildlife Resources said, “In the Upper Basin [of the Colorado River], specifically around Moab, we saw [a] pretty significant decline in [population] numbers in the mid-90s [which] prompted stocking. We began to augment the populations with fish we reared in hatcheries.”

For 30 years, managers stocked razorback in the Colorado River. Then in 2008, they began noticing an increase in adult razorback numbers and detecting spawning aggregations which prompted managers to begin tracking reproduction.

Creighton explains, “We [went] into the rivers around Moab, in the Green and Colorado Rivers, and…set larval light traps… to determine whether or not these fish were successfully spawning.”

The light traps collected a promising amount of razorback larvae in both the Green and Colorado Rivers.

Managers could now say the Razorbacks do well as stocked adults, they reproduce in the wild, and their eggs hatch successfully.

The question left unresolved is why the “young of the year” are not surviving, juvenile razorbacks are rarely seen in the wild.

Unraveling the bottleneck between when the Razorbacks hatch and when they become adults has become the new focus for managers.  This is where the Matheson Wetlands project came in. Utah Division of Wildlife Resources partnered with the Natural Conservancy to build the fish nursery.

Creighton explains, “The main goal [of the project] is to get [the razorback suckers] off the endangered species list. To recover them to self-sustaining populations that can maintain their numbers without…stocking. It’s a pretty ambitious goal, especially because we have to do [it] in the face of continued water use and water development…The recovery program is not battling or trying to stop water development, its goal is [simply] to recover these species in the face of what is currently happening with water use.”

Phaedra Budy, a professor in the Watershed Sciences Department at USU and unit leader for U.S. Geological Survey Utah Cooperative Fish & Wildlife Research Unit said, “The Razorback sucker has intrinsic value to the [Colorado River system], is a critical member of the ecosystem, and deserves every effort for recovery.”

The ONB features articles from Cooperative Fish and Wildlife Research Units across the country. The Units are leading exciting, new fish and wildlife research projects that we believe our readers will appreciate reading about. Shauna Leavitt is a Public Relations Specialist is the Quinney College of Natural Resources at Utah State University, Utah Cooperative Fish and Wildlife Research Unit, shauna.leavitt@usu.edu