One of the major research efforts for combating White-Nose Syndrome (WNS) in bats is to monitor bat populations, which includes identification by species. Monitoring bat populations of hibernating bats is challenging because of inaccessibility to all areas of the hibernacula and the potential of disturbance to bats during the counts. Furthermore, finding the hibernacula can be difficult. The summer maternity roosts can also be monitored, and possibly provide more accurate estimates of population trends due to the smaller concentrations of bats in the colonies. The summer roosts also offer data about female reproductive output. Like the winter hibernacula, data on summer roosts are lacking in many areas. Summer roosts offer an important conservation strategy for helping bats survive in areas affected by WNS – bats that can survive hibernation in WNS-infected hibernacula could be protected in their summer roosts and produce more off-spring that are possibly genetically suited for surviving WNS, like their parents. 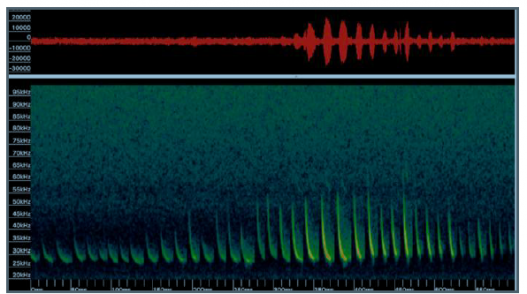 In 2015, the University of Winnipeg joined Neighborhood Bat Watch, a citizen science program that uses the general public to collect a large amount of data over large spatial and temporal scales, and in doing so, engages these citizen scientists in the protection of bats. Bat watch participants upload the locations of bat maternity colonies to the website. However, in most cases the general public is unable to identify the species of bats using these summer roosts.

In 2018, in part through funding* from the US Fish and Wildlife Service White-Nose Syndrome small grants program, the University of Winnipeg began a project to help these citizen scientists and biologists determine the species occupying some of the identified summer colonies using handheld acoustic detectors. The participants in the study were loaned the acoustic detectors, instructions, data sheets and protocol for collecting the data. Between the citizen scientists and the professional technicians, the detectors were used at 27 sites and successfully determined the species occupying the colony at 17 locations. The researchers determined that 11 of the sites are suitable for the installation of heated bat houses.

Throughout the study, the field crews gave public presentations on the types of data citizen scientists can provide to help conserve bats.

*The amount of funding from the USFWS WNS small grants program was $22,819.86. The views and conclusions contained in this document are those of the authors and should not be interpreted as representing the opinions or policies of the U.S. Government