A recent study analyzed the social network among conservation partners across the boreal forest region of Alaska, Yukon, British Columbia and western Northwest Territories. The project was led by Dr. Patrick Bixler, from the University of Texas with support from the Northwest Boreal Landscape Conservation Cooperative (NWB LCC) and the Wildlife Management Institute (WMI). The goals of the study were to identify stakeholders and their roles in the conservation social network, characterize the relationships among partners, track changes in the network over time as the NWB LCC matured, identify ways to strengthen linkages between partners to implement the NWB LCC’s strategic plan, and catalyze discussion about landscape conservation performance metrics. 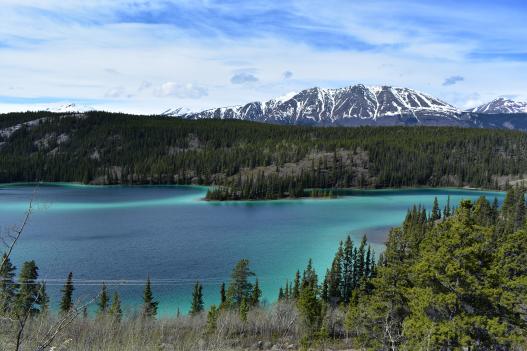 Analyzing the individual actors and the ties, edges, and links that connect them – i.e. their social network – allows partners to enhance their ability to work together toward shared goals. Social network analysis is an emerging technique in social science that “maps” the connections among partners and evaluates how each contributes to the flow of information and resources and participates in decision-making. Social network analysis can reveal the strengths and weaknesses of a large-scale collaborative effort, such as the NWB LCC which seeks to bring together partners across more than 330 million acres in Alaska and northwestern Canada.

From 2015 to 2018, Dr. Patrick Bixler with the University of Texas undertook a comprehensive analysis of the NWB LCC’s social network. The project was funded by the U.S. Fish and Wildlife Service, through the NWB LCC, and administered by the Wildlife Management Institute. The study involved two comprehensive online social network analysis surveys conducted in 2015 and 2017 and four in-person meetings with the NWB LCC Steering Committee.

The goals of the study were: (1) identifying stakeholders and their roles in the conservation social network and characterizing the relationships between them; (2) tracking change in the network over time; (3) analyzing the NWB LCC network based on strategic plan goals and making recommendations for strategic networking to strengthen linkages between program goals; and, (4) using network analysis information to catalyze a conversation about landscape conservation performance metrics.

The study identified a cohesive network, with distinct subgroups in Alaska and Canada. From August 2015 to December 2017, reciprocal ties between the subgroups and among partners increased through interactions sponsored by the NWB LCC. The analysis identified several organizations that have access to different pieces of information from different parts of the network, and have both insight and ability to know which groups to connect and not to connect, how to connect them, and when. The social network can be a positive force in achieving two of the NWB LCC’s strategic goals – improving information sharing and establishing baseline datasets for landscape-scale monitoring.

NWB LCC Partnership Director, Leanna Hefner, and former NWB LCC Science Coordinator, Amy Pocewicz, both said the study will help the ongoing efforts of the partners to bridge the gaps between agencies, organizations, Tribes, First Nations, and countries as they seek ways to understand and adapt to changes driven by climate and anthropogenic forces in the North. The final report for the project is available from Dr. Bixler.