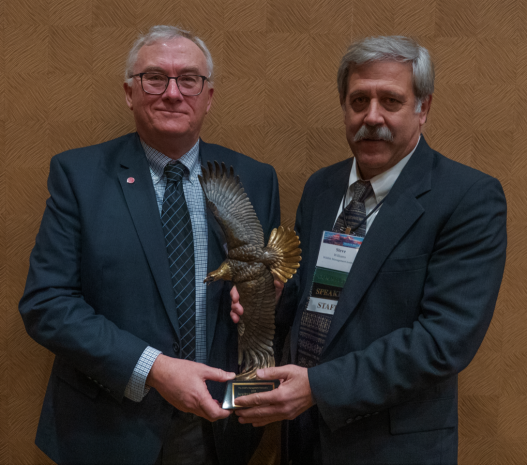 This award, established in honor of the widely acknowledged “Father of American Conservation” – George Bird Grinnell – is natural resource management’s highest individual honor and was presented by the Wildlife Management Institute’s President, Steve Williams. The award was established to honor a person who has dedicated their career to professional science, management, and conservation of natural resources and who has done so without fanfare or search for personal recognition.

In presenting the award, Williams noted, “This year, our recipient not only embodies the quiet, unassuming, and immensely effective character of the award’s namesake, but he brings to those traits an inconceivable work ethic paired with an unlikely compassion for others and the resource that, in combination, epitomize the ideal of servant leadership.”

Decker began his more than 40-year service to natural resources in 1974 after completing a bachelor’s degree in Wildlife Ecology followed by both a Master’s and PhD. Earning all his degrees at the prestigious Cornell University, he continued to climb Cornell’s academic ranks with uncommon ease and competence in the years that followed. By 1998, he was a tenured professor and had already served appointments as Department Chair and Department Extension Leader. He would go on to become the Director of the university’s Agricultural Experimental Station, Co-leader and then Director of the Human Dimensions Research Unit (now the Cornell Center for Conservation Social Sciences), Associate Dean of the College of Agricultural and Life Sciences, Director of the Office of Land Grant Affairs, and Chair of the Department of Natural Resources.

While achieving his exemplary contributions to academia and research, Decker provided nearly 20 years of leadership to the wildlife profession by serving first as the Northeast Section President of The Wildlife Society in the late 1980’s, and then becoming Vice President followed by President of the Society in 2001 and 2003, respectively. All of this while he served on dozens of professional boards and committees, completed hundreds of peer-reviewed publications, authored the first Human Dimensions textbook (now in its 2nd Editions), and developed dozens of professional trainings and workshops.

Though wildlife sciences and extension work were where Decker first applied his keen intellect and unique penchant for excellence in his personal and professional life, it was his later shift to the much tougher intersection of human values and conservation that led to the indelible impact he has made upon natural resource management.

“While he was not the first to highlight the importance of human dimensions work and the influence it has on sustainable conservation, he has arguably been the most effective and productive scientist in shepherding human dimensions from the incubator of academia into the everyday mindset of fish and wildlife management,” said Williams in his award presentation remarks. “During his tenure as Co-leader and then Director of Cornell’s Human Dimensions Research unit, Dan pioneered relationships between academia and management agencies that yielded decades of effective and efficient social science inquiry that provided solutions to the wicked, real-word problems threatening the relevancy of agency-led conservation.”

Indeed, the list of graduate students, research professionals, publications, and original ideas produced at the Research Unit under Decker’s thoughtful guidance have not only advanced the understanding of the human relationship to natural resources, but they continue to change the very way management professionals think about and apply public trust thinking and good wildlife governance norms.

Noting Decker’s immeasurable contributions to the natural resource profession, his impeccable professional and personal ethic, and his innovative vision for 21st century wildlife management, Williams summed up the award presentation by quoting a colleague in reference to Decker, “This guy had it all figured out in the late 90’s. He’s just been waiting for the rest of us to catch up.”