On February 25, 2021, the World Wildlife Fund-Telmex Telcel Foundation Alliance, in collaboration with the National Commission of Protected Natural Areas (CONANP) and the National Autonomous University of Mexico (UNAM), reported the monarch butterfly in Mexican hibernation forests decreased by 26% this year, occupying 2.10 hectares (ha) compared to the 2.82 ha reported during the winter of 2019-2020. 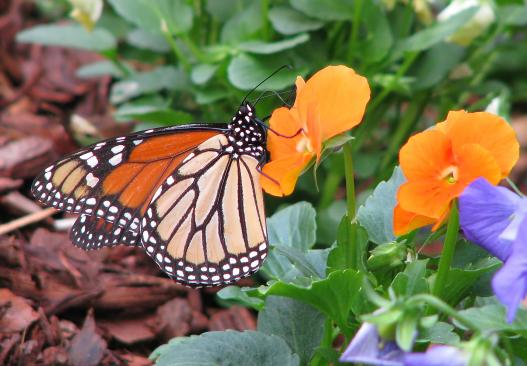 During the spring and summer of 2020, climatic variations in the southern United States were not favorable for milkweed blossoms and the development of eggs and larvae. This limited the reproduction of the monarch population, with an impact on the migrant generation, reducing the population of this insect throughout North America and leading to a smaller population occupying the Mexican forests during its hibernation.

The Alliance also released data on forest degradation in the monarch wintering reserves at the same time. Between March 2019 and March 2020, 20.26 hectares in the core area of the Monarch Butterfly Biosphere Reserve were degraded—four times more than the 5 hectares of degradation recorded from 2018-19. Forest degradation was largely driven by clandestine logging, but other factors included tree fall due to wind and drought and some legal logging done to control forest pests.

This announcement comes after surveys of the western population of monarchs indicated less than 2,000 monarchs wintering in California. This is a significant decline from the low numbers of the last two years where the total was slightly less than 30,000 monarchs. These numbers are a tiny fraction of the millions of monarchs that likely visited overwintering sites in the 1980s and the hundreds of thousands of monarchs that graced California’s coast as recently as the mid-2010s. This estimate of the western Monarch population represents an overall decline of more than 99.9% in numbers.

This new set of information has already resulted in a greater sense of urgency for conservation administrators in Mexico, Canada and the United States. Further discussions will occur to decide additional policy to help the monarch at international, national, regional, state, and local efforts. In the very short term, all readers can help by incorporating additional milkweed and flowering plants into their spring garden planning!