Six states are implementing the Fish and Wildlife Relevancy Roadmap with support from the Wildlife Management Institute (WMI) and a Multi-State Conservation Grant from the Association of Fish and Wildlife Agencies (AFWA). The states (FL, IA, IN, MO, NC, and PA) are undertaking diverse approaches to engaging and serving broader constituencies tailored to their specific needs. In addition to helping these six states, WMI has created an online Conservation Relevancy Community to provide a platform where all agencies and organizations can connect, share information, and support each other’s efforts to expand conservation relevancy. 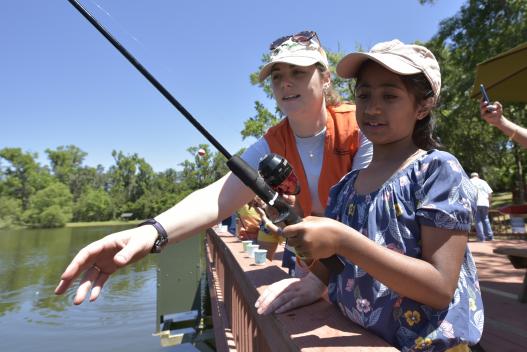 WMI President Steve Williams said, “State fish and wildlife agencies have recognized the need to build on their long-standing relationships with hunters and anglers to engage more citizens in conservation. The Relevancy Roadmap provides dozens of ways to do that. WMI is pleased to be working with several states to strengthen their ability to serve all their constituents.”

AFWA endorsed the Fish and Wildlife Relevancy Roadmap in September 2019 and awarded WMI a Multi-State Conservation Grant to pilot implementation of the Roadmap in 2020. Under the grant, WMI is providing consulting, training, and financial support to six states.

The Florida Fish and Wildlife Conservation Commission is developing comprehensive stakeholder engagement strategies for two of its divisions. FWC Relevancy Coordinator Ann Forstchen said the agency is looking for the most appropriate methods to reach new constituents in new situations. Forstchen said, “We need to find better ways to connect with residents in large urban centers and with our growing Hispanic communities where traditional public meetings may not be effective.”

The Iowa Department of Natural Resources (IDNR) is working with a citizen advisory group and using grant funding to contract with Responsive Management to better understand citizens’ awareness of and interest in birdwatching at three of the agency’s Bird Conservation Areas (BCA). Michelle Wilson, executive officer with the IDNR said her agency is also partnering with Iowa Tourism to help with this effort. Wilson said, “Advisory group members mentioned that for newer users having the option to combine birdwatching with a visit to a unique coffee shop or a brewery was very appealing. That makes a day trip to view and photograph birds a local economic driver. Our state tourism agency can help us significantly in that area both on the ground as well as providing information to help us connect differently with our constituents.”

The Indiana Division of Fish and Wildlife (IDFW) initially planned to hold in-person focus groups with citizens living within 25 miles of two of their Fish and Wildlife Areas to identify ways to engage nearby residents in citizen science and stewardship programs. When the pandemic hit, the agency had to adapt their approach, using Zoom to hold online gatherings. Elizabeth Middleton, stewardship outreach specialist with IDFW said that despite the impacts of COVID-19, IDFW was able to learn a lot from their dialogs with citizens that will help shape program design and delivery.

The Missouri Department of Conservation is using the Relevancy Roadmap to provide direction for its newly established Relevancy Branch. Jason Sumners said MDC recently hired a branch chief, and filled five recreational use specialists across the state to identify new ways to engage citizens on public lands. The MDC has proposed a regulation change that would increase the areas where bikes may be used on MDC owned and managed lands and is reviewing all programs in the agency to identify where and to whom their programs are being delivered. Result of the review will be used to ensure more citizens have access to the benefits of MDC programs.

The North Carolina Fish and Wildlife Resources Commission (NCWRC) held two relevancy workshops. The first workshop, led by WMI, focused on wildlife governance principles and public trust responsibilities. The second, led by the AFWA Management Assistance Team, focused on equity and inclusion both within the agency and with constituents. Falyn Owens, extension wildlife biologist with the NCWRC and member of the agency’s Partnership for Inclusion, said both workshops were well-received by staff and stimulated important internal discussion about how NCWRC can better meet the need of all citizens and be welcoming to a more diverse staff.

The Pennsylvania Fish and Boat Commission contracted with Responsive Management to conduct a survey of the Philadelphia metropolitan area to assess people’s awareness of and participation in aquatic programs offered by the agency. Sean Gimbel, strategic initiatives and special projects coordinator for the Commission said there’s plenty to be optimistic about when it comes to fishing in one of the nation’s most urban population centers. The survey showed that Black anglers and Blacks in general are very interested in fishing, water quality, and teaching others to fish. Unfortunately, there were not enough Hispanic/Latinx or Asian respondents to derive meaningful results for those minorities. “That’s unfortunate” said Gimbel, “because those are two of the fastest growing groups in Pennsylvania.” Gimbel said the Commission will use the results of the survey to improve outreach and program delivery in the Philadelphia area.

Additional information about these states’ projects and other efforts is available on the Conservation Relevancy Community website hosted by WMI.