In late September, 40 teams of volunteers rode their bikes over 2,600 miles across Montana to gather data on wildlife killed along Montana’s roads. This was the fourth and largest sample period in the Montana Wildlife Connectivity project conducted by Adventure Scientists in partnership with the Montana Department of Transportation (MDT) and Montana Fish, Wildlife and Parks (MFWP). The teams identified over 1,200 wildlife mortalities, including 445 ungulates. Data from this project will contribute to planning and implementation of mitigation strategies to reduce wildlife-vehicle collisions (WVC) and lower transportation-related barriers to wildlife movement. Senior Volunteer Manager Michelle Toshack said the project is one of two studies Adventure Scientists is coordinating that engage citizens to leverage agencies’ capacity to gather data to support conservation worldwide. 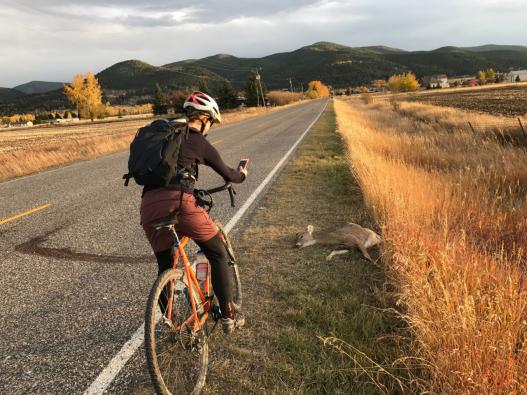 Wildlife-vehicle collisions kill more than 365 million animals, injure 29,000 people, and cause $8.4 billion in damage each year in the U.S. Highway-related mortality can also contribute to habitat fragmentation and impact migratory movements. WMI previously reported on a West-wide workshop that brought together wildlife biologists and highway engineers to address this issue and has provided staff for the Idaho Department of Fish and Game to monitor WVCs on State Highway 21 to develop mitigation strategies that reduce WVCs.

Montana has the second-highest rate of WVCs per capita in the United States. MDT and MFWP have joined forces with Adventure Scientists to gather data on the location of roadkill to reduce impacts to people and wildlife. Based in Bozeman, MT, Adventure Scientists is a non-profit organization whose mission is to equip partners with data collected from the outdoors that are critical to addressing environmental and human health challenges. Past projects have addressed issues as diverse as micro-plastic contamination in all the world’s oceans, distribution of pollinators across the western U.S., and antibiotic resistance based on scat samples from marmots in Afghanistan, bears in Alaska, and fox in Nepal.

The Montana Wildlife Connectivity project is one of two studies currently being coordinated by Adventure Scientists to gather data on the impact of human activities and infrastructure on wildlife connectivity. From 2019-2022, Adventure Scientists volunteers will cycle Montana’s roadways, recording all roadkill and wildlife they encounter as well as detailed environmental observations. During each of four sampling periods per year, teams of volunteers will ride bikes along designated sections of highway documenting both dead and live wildlife and gather site-specific data associated with each observation. Data and photos of each observation are captured on a smart-phone app and automatically uploaded to a database maintained by Adventure Scientists.

Each segment is approximately 25 miles long, and volunteers ride both sides of the road so each route requires riding 50 miles. Volunteers select their routes on the project website and are encouraged to ride with a partner for safety. Teams may also divide the 50 miles among teammates and gather data in relay fashion. Adventure Scientists provides training on data collection protocol, use of the data app, and rider safety (including responsible riding during the COVID-19 pandemic) to all volunteers before they ride. Adventure Scientists also provide riders with reflective vests and ankle bands, as well as bright lights for their bikes to increase the visibility of riders. WMI Western Field Representative, Chris Smith, who volunteered to ride a segment near his home in Helena, said this project lets him combine his lifelong commitment to wildlife conservation and his passion for cycling. Smith’s segment crosses the Continental Divide – twice – so it also helps keep him fit.

Over the first four sample periods, 66 teams of volunteers have ridden over 4,200 miles and recorded nearly 3,400 observations. Scientists interested in a partnership with Adventure Scientists to explore ways to engage citizen volunteers in a project should contact Project Creation Manager, Lindsay Wancour. Lindsay can be reached at (406)624-3320 x 703 or by email.