Wildlife professionals continue to work diligently to understand and manage the spread between humans and wildlife of the beta coronavirus SARS-COV-2 that causes COVID-19. Zoonotic disease management often requires the involvement of wildlife, livestock, and human health professionals to address these issues. Recently, news stories have emerged concerning SARS-COV-2 in farmed mink and steps taken to minimize the risk of humans potentially transmitting SARS-COV-2 to bats. 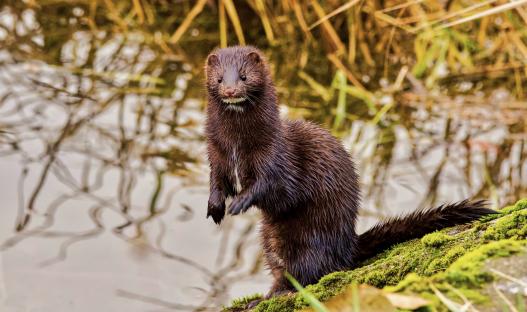 The first known SARS-COV-2 cases among United States farmed mink were reported from Utah, with the diagnoses confirmed in mid-August by the U.S. Department of Agriculture (USDA). Authorities learned about farmed mink contracting SARS-COV-2 after farmers reported farmed mink deaths in numbers not previously seen. In October, authorities also confirmed SARS-COV-2 among mink in Wisconsin and Michigan. To date, there have been no detections in wild mink. According to Fur Commission USA, the nation’s largest association of mink farmers, there are at least 245 mink farms in 22 states. Wisconsin and Utah were the country’s biggest producers of pelts in 2019, according to the USDA.

Although detected in farmed mink in the U.S. in August, SARS-COV-2 infections of farmed mink have been reported in European countries including Denmark, the Netherlands, and Spain since April. In June 2020, authorities in these countries began euthanizing hundreds of thousands of animals, concerned that the mink could harbor the virus indefinitely, enabling infections to persist among farmed mink – and potentially continue to spread from farmed mink to humans.

In November 2020, Denmark proposed to cull all of the 15 million farmed mink in the country after finding additional SARS-COV-2 infections among the farmed animals. The proposal was subsequently withdrawn. The Nordic country is the world’s largest producer of mink and had previously culled animals on farms hit by infections, but outbreaks have persisted and are now found on 207 farmed mink facilities. The Danish government identified 12 cases in which humans had been infected by a mutated form of SARS-COV-2. The proposed cull of all farmed mink is intended to minimize the risk of farmed mink re-transmitting the SARS-COV-2 virus to humans, authorities said.

Many North American bat species have adapted to living safely alongside humans in urban and rural environments, in our gardens, parks, and even roosting around our homes as beneficial neighbors. Bats provide vital ecosystem services such as pest control, pollination, and seed dispersal.

Here in the U.S., natural resource agencies are taking steps to ensure that humans do not introduce SARS-COV-2 to wild bats. Natural resource agencies have suspended research and management activities or modified safety protocols to minimize exposure between humans and bats. Agencies have also provided guidance to the public to re-emphasize the importance of never touching a living or dead bat, to protect the bat and you. This has been standard operating procedure for decades because bats are a primary vector of rabies and the few rabies cases that occur in humans in the U.S. most often are associated with exposure to bats.

SARS-COV-19 has once again emphasized the importance of diseases that can be transmitted between wild animals, farmed animal species, and humans. Many of the disease agents can be carried silently by wildlife species without causing clinical disease in them. Effective management requires a diverse community of professionals to bring specific expertise to the management of a zoonotic disease. Risk management for future diseases should include consideration of increased surveillance of broad and specific categories of disease agents in wild species.