Trout Movements on the Smith River, One of Montana's Most Important Recreational Fisheries

Trout Movements on the Smith River, One of Montana's Most Important Recreational Fisheries 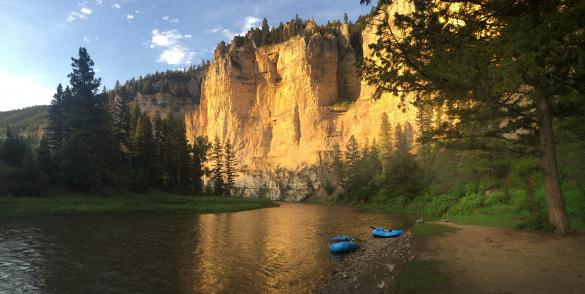 Salmonid abundances in the Smith River are relatively low and believed to be limited by high summer water temperatures and low discharges. Pilot studies have suggested that the extent and complexity of salmonid movement may be greater than once perceived, underscoring the importance of understanding tributary use and salmonid movement in regard to potential management strategies.

The researchers have used a collaborative approach to problem solving in Smith River studies and have worked closely with students and professionals in completely different disciplines to accomplish their goals. For example, the movement of tagged fish throughout the system is monitored using fixed and mobile PIT antenna arrays, but the remoteness and size of the Smith River basin and antiquated nature of available PIT technology have presented logistical obstacles. Collaboration with Montana State University electrical engineering students and an outside engineering consultant has resulted in the development of more sophisticated PIT tag readers and a remote monitoring platform that allows control, access, and uploading of data by satellite and website interface. Agency biologists and researchers can now monitor fish movement in remote locations from the office or smart phone in near real-time, saving time and resources and avoiding dangerous field trips in inclement conditions.

Although movement is common among fish of the Smith River, migratory patterns vary in magnitude and timing. Peaks in migratory activity occur in spring and fall and some migrations are extensive, with some fish occasionally migrating more than 100 miles. Brown trout show the least propensity to migrate, whereas mountain whitefish are the most likely to migrate. Rainbow trout movements are mostly associated with spawning migrations into tributaries or juvenile outmigrations. Suckers (Catostomus spp.) migrate more than 30 miles within the main stem Smith River but rarely move into tributaries.

Movement of fish in rivers such as the Smith has created the distribution and structure of fish assemblages we observe today. Although in certain circumstances fish can complete their entire life cycle without substantial migration, many fish rely on migratory behaviors to move among various habitats across watershed landscapes. Migratory life history patterns can improve individual fitness and can make populations of fish more resilient to environmental disturbances. The variety of migratory patterns expressed among the Smith River fish assemblage adds strength and resilience to fish populations and can help fish cope with seasonally unfavorable environmental conditions. As climate change continues to alter the temperature and discharge regimes of inland streams such as the Smith River, migration will be an increasingly important way for fishes to persist. Proper management that accounts for migratory life histories is needed to ensure that fish can maintain these important migratory life histories.