The Blue Ribbon Panel on Sustaining America’s Diverse Fish & Wildlife Resources issued two key recommendations for state wildlife agencies: 1) to increase funding for fish and wildlife conservation and 2) to increase the relevancy of conservation to a wider audience. The first recommendation led to the introduction of and advocacy for the Recovering America’s Wildlife Act (RAWA) in the U.S. House of Representatives and U.S. Senate, and the second recommendation led to the development of the National Conservation Outreach Plan (NCOP) to promote the relevancy of wildlife agencies to a broader audience. The Outreach Plan is now moving forward with a public awareness campaign under the overarching theme of “Making It Last”. 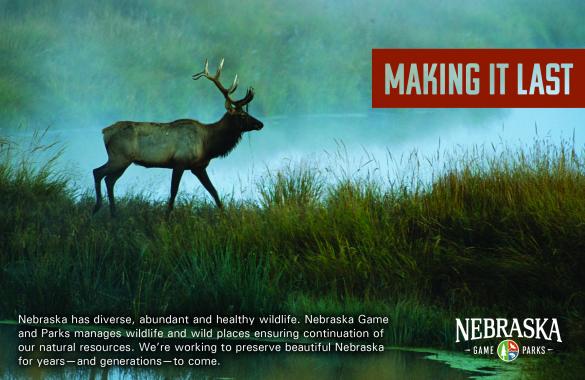 In spring 2018, the Association of Fish and Wildlife Agencies (AFWA) and a national steering committee of communication professionals contracted with a marketing firm to develop the marketing campaign. A key part of the direction for this campaign was to make it adaptable, so that each state could use it in a way that aligns with its needs, audience, and budget. The “Making It Last” concept is about connecting with the public’s deep pride in natural resources and how they want those resources to be conserved for future generations. The theme and messaging are based on marketing research as well as input from state communicators.

Making It Last is an opportunity for states to connect with new audiences and be relevant to more than their traditional audiences. Not only is there a need for new relevance but the most recent U.S. Fish and Wildlife Service Survey of Fishing, Hunting, and Wildlife Associated Recreation research points to the continued long-term decline in participation in hunting and fishing (fortunately short-term trends show an increase in fishing). Meanwhile research also shows that those who do not hunt or fish perceive state fish and wildlife agencies as only relevant to hunters and anglers or do not even know what they do. While state communicators work to support recruitment, retention, and reactivation efforts they can also reach out to new segments of the population who have a passion for wildlife and nature, while staying connected to hunters and anglers.

The good news is that there is growing participation in wildlife-watching as well as interest in conserving wildlife and natural places in every state. According to the most recent USFWS Report (2016), 34 percent of all Americans participate in wildlife-watching. National research, such as the 2017 Nature of Americans study, found that more than two-thirds of Americans place a high value on nature as important to their physical and emotional well-being and strongly believe it should be conserved for future generations. This presents an exciting opportunity for fish and wildlife agencies to become relevant by implementing a campaign to increase awareness of the critical role our agencies play in conserving the nature and wildlife these audiences care about.

In late August, the Making it Last campaign and an associated toolkit was presented at the annual Fish and Wildlife Business Summit, which is a gathering of state, federal, industry, and NGO partners that work on issues associated with conservation funding and relevancy. One focus of this coalition has been to assist with the development and promotion of a campaign that would be adaptable, universal, and long-lived that would also resonate widely with various publics, including hunters, anglers, boaters, recreational shooters, and the general public. The discussions on the Making it Last campaign among coalition partners were productive and the concept was widely accepted by many of the partners participating in the Summit. Many also committed to incorporating the campaign into their individual agencies, businesses, and organizations as appropriate.

If all state agencies and their industry and conservation partners commit to supporting this campaign, there will be unified momentum behind it. In the near future, an implementation toolkit, including proposed paid and non-paid media approaches; evaluation recommendations and more, will be provided to enable each state agency and their partners to implement the campaign regardless of their budget constraints or other communication needs.