The USGS Wyoming Cooperative Fish and Wildlife Research Unit is leading research on the effects of dams and water diversions on burbot populations, a popular sport and food fish and species of conservation concern. Burbot are the native top predator in many of the region’s waters and are culturally significant to the Eastern Shoshone and Northern Arapaho American Indian Tribes. The Wyoming Unit suspects that burbot entrapment into irrigation waters is linked with burbot out-migration from the closest dam-augmented lake (Bull Lake) during high flow releases. 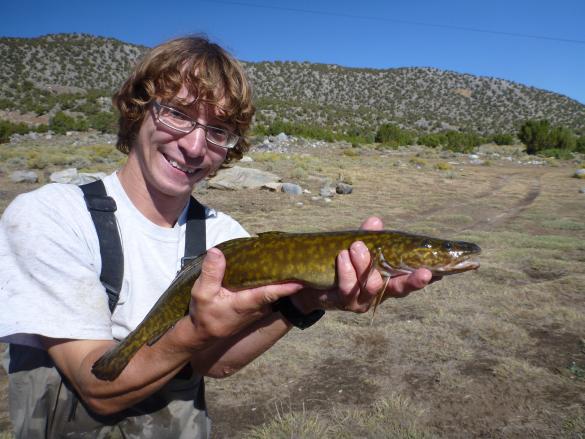 From 2000 to 2010 Wyoming Game and Fish Department and U.S. Fish and Wildlife Service biologists salvaged 240-2685 (average 853) burbot a year from the Pilot Butte Irrigation Canal in the Wind River Drainage, Wyoming. More than 70 percent of the fish were juveniles. As a result, biologists wanted to know where the trapped burbot came from and whether dam operations might be contributing to burbot entrapment in the irrigation canals.

Burbot are highly susceptible to the effects of dams and water diversions as they are weak swimmers, poor jumpers, and have a passive larval drift phase, which makes them unable to cope with both high flow releases and small anthropogenic barriers such as culverts and diversion dams.

The Wyoming Unit used three complementary approaches that addressed different time scales to test this idea. They used high throughput genomic sequence data to characterize the relationships between populations within the drainage, assessed where fish were born with otolith strontium microchemistry, and explored movement of burbot in response to dam releases with a PIT-tag, mark-recapture study. They expected to see increased fish movement during high flow dam releases and that the fish entrapped in the irrigation network would be genetically related to Bull Lake fish and have been born in Bull Lake.

Historically this type of study would have focused on tagging fish and observing their movement to see what proportion became trapped. This study used several new approaches in addition to tagging that allowed greater insight. For example, strontium otolith microchemistry uses the strontium isotope ratio in the fishes’ ear bone to assess where a fish was born and high throughput genomic sequence data allows differentiation of more recently diverged populations.

The more thorough and mechanistic understanding of the effects of dams and diversions achieved through this approach will enable resource managers to make more effective conservation plans to mitigate the effects of water development in the Wind River, Wyoming.

The ONB features articles from Cooperative Fish and Wildlife Research Units across the country. Working with key cooperators, including WMI, Units are leading exciting, new, fish and wildlife research projects that we believe our readers will appreciate reading about. This article was written by: Annika Walters, Assistant Unit Leader-Fish, USGS Wyoming Cooperative Fish and Wildlife Research Unit.