Researchers with the U.S. Geological Survey Maine Cooperative Fish and Wildlife Research Unit (Maine CRU) have developed a model that predicts areas that have a high suitability for monarch butterflies for roosting during their fall migration to Mexico. When spotting a butterfly, a common reaction may be to whip out a phone and snap a photo. The Maine researchers are hoping another response could be to use the phone to log details about areas where butterflies are likely to be found. Using a mobile app, anyone can become a citizen scientist by visiting potential monarch butterfly roosting sites from Maine to Georgia and answering questions based on their observations. 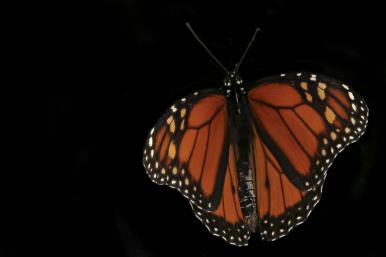 Brandon Boxler, who is pursuing a master’s degree in ecology and environmental sciences, and Cynthia Loftin, associate professor of wildlife ecology and leader of the Maine CRU, plan to use data collected from the app to validate a model that predicts the location of monarch roosting sites.

“Although we have developed an initial model, without ground truthing it will be hard to know the validity of the results,” says Boxler. “This application will assist us in testing and refining the model.”

The monarch butterfly conducts one of the most dramatic migrations in the world, according to the researchers. Every fall, the great-great-grandchildren of butterflies who came north from Mexico in the spring turn south and begin a 3,000-mile journey to their overwintering grounds.

However, the number of monarchs completing the migration has fallen by 90 percent in the past two decades, the researchers say.

“The monarch migration is declining because the overall number of monarchs is declining,” says Boxler, who adds there are many causes for the decline, including loss of overwintering habitat due to logging, loss of breeding habitat — native milkweed — to herbicides, as well as exposure to pesticides, disease and parasites/parasitoids.

Researchers around the country, including Boxler and Loftin, are learning more about the monarch and its behavior in an attempt to curb the population decline.

While migrating in the fall, monarchs rest at night, often in groups of several hundred or thousand. Tens of thousands of monarchs can cluster on one tree, according to the U.S. Forest Service.

Boxler and Loftin completed a model that seeks to determine where the roosts occur and the factors common among the sites. The model suggests the butterflies tend to roost in vegetation, often in trees or bushes in otherwise open areas. They are more likely to be found near open water, and in areas with fall blooming flowers from which they can feed.

Due to the large area the model covers, it is not feasible for the researchers to ground truth, or confirm, the findings themselves.

The Monarch Model Validator, which is a survey within the Collector for ArcGIS app, was created by a former UMaine master’s student, Drew Rosebush. In spring 2018, Rosebush took a geographic information system (GIS) class taught by Kate Beard-Tisdale, a professor of spatial information science and engineering. He and three other students helped Boxler and Loftin get the app development underway as a project in the class, according to Loftin.

Users of the app may visit a predetermined high-priority site indicated by a pin on a digital map or a location of their own. While there, they are asked to answer a short survey and upload photos.

Responses are compiled in an online database the researchers will access to determine how the information compares to predictions made by their original model.

More information about the project, including instructions on how to download the app, is online. Questions can be emailed to monarch-model-group@maine.edu.

The ONB features articles from Cooperative Fish and Wildlife Research Units across the country. The Units are leading exciting, new fish and wildlife research projects that we believe our readers will appreciate reading about. Permission to repost this story by University of Maine author, Elyse Catalina.