As Autumn brings with it the start of big game hunting seasons across the country, wildlife agencies and managers are preparing for Chronic Wasting Disease (CWD) surveillance efforts that rely on test samples from harvested deer, elk, and moose. The data gathered from the results of this year’s game harvest, as in past years, will inform wildlife managers and researchers on the effectiveness of the nation’s collective efforts to control and contain CWD. Fortunately, the disease has yet to be found in a new state or province in 2019, though several states managing the disease have documented it in new counties or in higher prevalence than previous years. Following the discovery of CWD in Mississippi, Tennessee, and Quebec last year, the disease has now been been found in wild or captive cervid (members of the deer family) herds in 26 U.S. states, three Canadian Provinces, Norway, Finland, and South Korea. 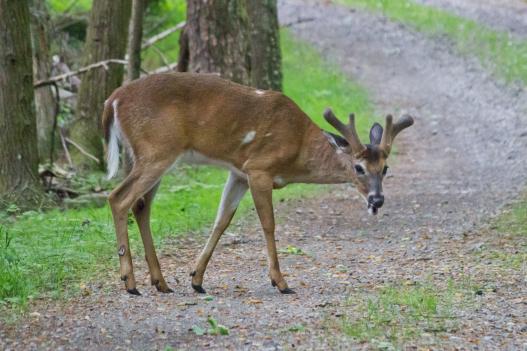 Unfortunately, the challenges of CWD management are still relatively unchanged; despite nearly two decades of attempts by wildlife managers to eliminate or manage it, CWD has continued to either persist, increase in prevalence, or spread to new areas. The disease remains always fatal to susceptible species, is un-treatable (like all infectious prion diseases), and continues to negatively impact populations of elk, mule deer, and white-tailed deer where prevalence is high (over 20%). Thus, CWD is, and continues to be, a real and undeniable threat to cervid herd health and productivity.

Fortunately, 2019 has seen a host of new efforts implemented by wildlife management agencies and conservation organizations to address and control the persistent impact of CWD on North America’s deer, elk, and moose populations. The following are examples (not a comprehensive list) of efforts by state/federal fish and wildlife management agencies, universities, and conservation groups that are gaining ground in the fight to control the impact of CWD on the nation’s wild cervids.

The Chronic Wasting Disease Alliance initiated a CWD Applied Research Grant Program this summer to “support research that will enable state fish and wildlife agencies to more effectively manage CWD at levels that will not negatively impact the long-term sustainability of North America’s wild cervid populations.” The Rocky Mountain Elk Foundation and the Boone and Crockett Club (both founding members of the CWD Alliance), made available $100,000 to support this new grant program with the hope that it can be expanded by contributions from other conservation organizations and wildlife management agencies in the future. Priorities for this funding opportunity were developed through national working groups coordinated by the CWD Alliance and its partnering organizations and agencies.

The Michigan Department of Natural Resource and Michigan State University established a Wildlife Disease Initiative that recently made $4.7 million from the Michigan State General Fund available for “research, education, and outreach projects to address the most important issues around wildlife diseases in Michigan with an emphasis on Chronic Wasting Disease.” The initiative is a mechanism to rapidly respond to wildlife disease issues that emerge in Michigan, specifically CWD. More information about this unprecedented state-led CWD research program is available on the Michigan State University website.

In July, the Wisconsin Department of Natural Resources hosted a Midwest CWD Collaboration Meeting that brought in regional and national experts on CWD management, research, and policy to discuss new strategies for CWD management in Wisconsin and the Midwest region. This two-day meeting provided a review of the current state of knowledge on human dimensions research, CWD testing research, and many of the management actions currently being used to address CWD in the Midwest. Meeting facilitators also used the opportunity to develop CWD research and management priorities that can be implemented by the Wisconsin DNR and other Midwest states.

The following pieces of legislation and amendments have been introduced and are under consideration by the 116th United States Congress. These excerpts were provided by the Theodore Roosevelt Conservation Partnership who, along with other conservation organizations, are coordinating advocacy efforts on Capitol Hill through a CWD Coalition organized by the National Deer Alliance and CWD Alliance. The CWD Coalition was formed to bring together non-government organizations working on the disease to provide regular updates to the group, as well as maximize collective resources. Since the Coalition was formed, it has expanded to include researchers, universities, tribes, and representatives from some state and federal wildlife agencies. The group meets formally every other month, or as necessary between regularly scheduled meetings.

The CWD Transmission in Cervidae Study Act directs a partnership to be formed between the U.S. Geological Survey and the Animal and Plant Health Inspection Service to support a National Academies of Science study to review the existing body of research on CWD. The study is intended to examine the transmission of CWD, to identify factors contributing to the spread of CWD, and to identify and prioritize research projects to address any knowledge gaps identified by this study.

This bill is a reintroduction of Congressman Kind’s bill from the 115th Congress (then H.R. 4454). This bill is designed to provide funding to state and tribal wildlife agencies in order to develop and improve responses to CWD and to provide funding for CWD-related research via the U.S. Department of Agriculture (USDA). The bill establishes a framework for states and tribes to apply for grants for CWD response through USDA. This fund would be established with $20 million for states, $5 million for tribes, and $10 million for rapid response for a total of $35 million annually. In addition, this bill would create an applied research grant fund of $10 million, also administered by USDA, to research sustainable cervid harvest management techniques aimed at controlling CWD.

This legislation would provide funding to state wildlife and agriculture departments to continue developing and implementing CWD surveillance, testing, and response plans via a multiagency CWD task force to coordinate funding and research and to serve as a clearinghouse for the federal CWD response. The bill also directs USDA to award funding to land-grant universities to create a “Mid-South Center of Excellence in Wildlife Diseases.”

The Chronic Wasting Disease Research Act amends the Animal Health Protection Act by inserting a section outlining the importance of the federal government’s role in combating CWD in cervids and establishes that, no later than 90 days after enactment, USDA will create a competitive, $15 million FY20 grant program designed to support research related to detection of CWD in cervids, the environment, and inorganic surfaces and methods to decontaminate them. The grant also supports research for the long-term suppression or eradication of CWD, as well as funding to support research into markers for genetic resistance to CWD and ways that genetic resistance might help combat the spread of CWD.

Given the limited number of feasible or effective CWD management options once the disease has entered a susceptible herd, most biologists agree that the best way to address CWD is to prevent its introduction into new landscapes. According to the CWD Alliance’s CWD Basics, “The most effective strategies, by far, are those that eliminate ways CWD can travel to new areas by infected animals or infected animal parts.” For the past decade, state fish and wildlife management agencies have continued to identify possible routes of CWD transmission into, or out of, their state and pass regulations that attempt to close those gaps. In 2019, many wildlife management agencies have instituted bans on urine-based scents used in hunting, and many others have established moratoriums on the movement of certain types of cervid carcass parts into or out of states or counties. As these regulations frequently change, hunters are strongly encouraged to familiarize themselves with the CWD-related regulations in the state, or states, they hunt in or may travel through with a harvested deer, elk, or moose. Hunters can view many of these regulations at the CWD Alliance’s interactive CWD news and regulations map where they can also find links to state fish and wildlife management agency CWD websites which house the most current status of regulation changes.

For more information about CWD, please visit the following websites: