Despite repeatedly being referenced as uncharismatic, few organisms can bring together 21 different agencies, drawing on collaborations from 14 states – but that is just what is happening with a freshwater mussel in the Northeast. The U.S. Geological Survey Massachusetts Cooperative Fish and Wildlife Research Unit is leading research on brook floater, a mussel listed as threatened or endangered by most states where it occurs. This organism is a small (less than 100 mm) freshwater mussel that has a single, bright cantaloupe colored foot that it uses to burrow into sediment on stream bottoms. Concerns about its decline led to the creation of the Brook Floater Working Group (BFWG). 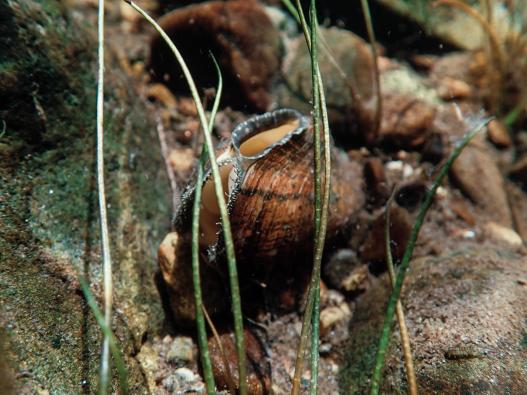 The BFWG has taken a unique approach to conservation by forming partnerships throughout the species’ historic range with state, federal and private representatives participating from Maine to Georgia. Funding awarded to the Massachusetts Division of Fisheries and Wildlife (MassWildlife) in 2016 from a U.S. Fish and Wildlife Service (USFWS) State Wildlife Grant marked the start of the collaboration. Monthly calls are led by researchers Dr. Allison Roy of the U.S. Geological Survey, Massachusetts Cooperative Fish and Wildlife Unit (Coop Unit), Ayla Skorupa, a PhD student in the Department of Environmental Conservation at the University of Massachusetts Amherst, Dr. Peter Hazelton of MassWildlife’s Natural Heritage and Endangered Species Program, and former Coop Unit postdoc Dr. Sean Sterrett, who organized the effort in the first two years.

The researchers have developed standardized protocols for rapid assessment of occupancy and estimates of population viability through mark-recapture. These protocols give agencies the ability to estimate brook floater occupancy throughout its range, relate them to important landscape factors, and compare mussel populations and habitat across state lines. This information is crucial for conservation since this species’ range has contracted, and population sizes continue to diminish.

Decisions from the BFWG also inform freshwater mussel culturing at the USFWS Richard Cronin Aquatic Resource Center (CARC) in Sunderland, MA. Dr. David Perkins, CARC Director, has worked with Dr. Roy since 2015 to transform the prior salmon hatchery to the first freshwater mussel propagation facility in the northeast. Freshwater mussels are unique in that they begin as microscopic parasites (called glochidia) that clamp onto fish to develop. Once they have transformed, they drop off the fish as a juvenile and are put into a recirculating system. The USFWS’s Timothy Warren has used creative ingenuity to develop numerous system designs for growing endangered freshwater mussels; they vary in water circulation and are made from materials found in hardware stores. The mussels are propagated in the lab and are later reintroduced to rivers in an effort to boost numbers within populations and push endangered mussels off state and federal protected lists.

Outside of the lab, partner Dr. Andrew Fisk of the Connecticut River Conservancy recruited citizen scientists to help look for brook floater in rivers and identify their habitat. This work requires donning a mask and snorkel and searching for siphons protruding through the sediment. It’s new to many volunteers, like Geoff Martin, a freelance writer who explained how he caught the mussel bug in his May 2019 article in the Boulevard: “I blink my way into this alternate, alluvial world. Small bug-eyed crayfish step forward to investigate. Juvenile trout swim alongside as I move my arms through rods of sheering sunlight.” With the contribution (about 400 hours) from volunteers like Geoff and additional funding by the Massachusetts Environmental Trust through the sale of environmental license plates, the researchers were able to quantify habitat for this species and identify locations to place lab-grown mussels in the wild.

Habitat loss is a long-recognized problem for many endangered species, and the brook floater is no exception. In-stream alterations that change flow and alter sediment loads can affect downstream locations where freshwater mussels live. Further, human encroachment from development, run-off of toxins into streams, and point source pollution can all contribute to loss of brook floater. And, since freshwater mussels require a fish host to reproduce, challenges facing fish can negatively influence freshwater mussels like brook floater. To plan conservation actions (i.e., habitat manipulation, reintroductions, land protection, and policies), BFWG will use a structured decision making (SDM) approach to identify the best areas for restoration and determine how many mussels are needed in each location to increase the distribution, number, and viability of breeding populations in the next 10 years. In June 2019, co-op student Ayla Skorupa deployed systems containing lab-propagated brook floater in Massachusetts for the first time with the goal of comparing their growth and survival between sites to understand reintroduction potential. The team will also consider information needs for Endangered Species Act (ESA) listing decisions, impacts to other species, and other management considerations.

While the threats to brook floater are significant and ongoing, what makes conservation success stories are the people behind them, like the collaborators on these projects, working tirelessly together to come up with large-scale solutions. Collectively, these research projects lead partners closer to restoring brook floater populations so the species can persist long into the future.

The ONB features articles from Cooperative Fish and Wildlife Research Units across the country. The Units are leading exciting, new fish and wildlife research projects that we believe our readers will appreciate reading about. Ayla Skorupa is a PhD student in the Department of Environmental Conservation at the University of Massachusetts Amherst and is advised by Allison Roy, Assistant Unit Leader—Fisheries at the Massachusetts Cooperative Fish and Wildlife Research Unit.