The Wildlife Management Institute (WMI) recently completed an assessment of the statutory and policy framework for conservation of big game migration corridors in 11 western states. WMI also examined the working relationships between state wildlife and transportation agencies in relation to reducing the impact of highways on migration and wildlife-vehicle collisions. This effort was funded by the Theodore Roosevelt Conservation Partnership (TRCP) and the Pew Charitable Trusts and built on an inventory of big game migration corridors WMI completed in 2017. 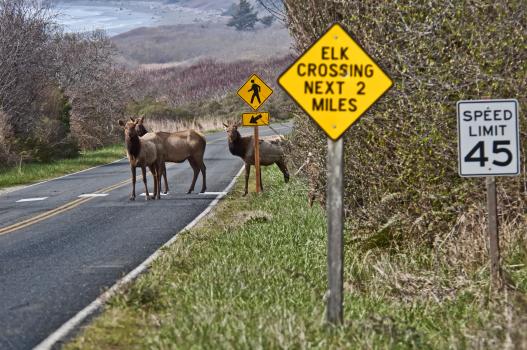 WMI determined that none of the wildlife agencies have legal authority to regulate land use or other actions that impact migration. However, many states have clear statutory direction for their wildlife agency to work with the federal government, other state agencies, and private landowners through non-regulatory means to conserve migratory habitat. In addition, several state legislatures recently passed bills strengthening corridor protection, increasing appropriations, or directing their wildlife and transportation agencies to address conflicts between highways and big game migration. For example, the Wyoming legislature approved HB 0039 in 2018 to create the “wildlife conservation” license plate. Sales of the plate raise funds for mitigating impacts of transportation infrastructure on mule deer migrations. These specialty license plates cost $100 over the price of a regular license plate. Funds from the sale of these plates can only be used for wildlife conservation efforts including signage, wildlife corridors, wildlife crossings and game fences. More than 3,000 plates have been sold, generating over $300,000. Earlier this year, the New Mexico legislature passed SB 228 which directs the New Mexico Department of Game and Fish and the New Mexico Department of Transportation to jointly create a “wildlife corridor action plan” to identify existing highway crossings and other human-caused barriers that pose a risk to wildlife migration and ways to mitigate those impacts.

WMI found that policy direction from governor’s offices or state wildlife boards and commissions varies widely. The Wyoming Game and Fish Commission adopted a formal classification system for migratory habitat and standards for agency input on land use and development plans several years ago. This policy helped the Wyoming Department of Game and Fish influence development to protect several important migratory routes. In California, then-Governor Brown signed Executive Order B-54-18 on September 7, 2018 to launch the California Biodiversity Initiative. The initiative directs the California Department of Fish and Wildlife and Caltrans to collaborate to maintain and restore connectivity. The Executive Order has enabled senior leaders within the Department to initiate discussions aimed at providing direction and support across the state for earlier engagement of Department staff in transportation planning and greater consideration of the need for wildlife connectivity. Other states are just beginning to focus on big game corridors. Funding made available under Department of Interior Secretarial Order 3362 is being used to gather data or undertake habitat projects.

WMI learned that state wildlife and transportation agencies are increasingly collaborative in their efforts to reduce wildlife-vehicle collisions and improve big game movement over, under, and across highways. This cooperation is driven by the need to simultaneously improve public safety, reduce the substantial costs associated with wildlife-vehicle collisions, and to conserve big game. The major barriers to further collaboration are staff and funding shortages and the different timescales for transportation and wildlife planning processes. The Ungulates and Highways Workshop organized by TRCP in January, 2019 brought together wildlife and transportation staff from 14 western states to develop strategies to overcome these barriers.

Protection of big game migration is a priority for TRCP. Results of this analysis will help the organization and their partners work with state wildlife agencies to identify both gaps and opportunities to strengthen the legal and policy framework for conservation of corridors. For further information about TRCP’s efforts, contact Ed Arnett, TRCP Senior Scientist.