On November 24, 2022 the U.S. Fish and Wildlife Service (Service) published a final rule adding the Lesser Prairie Chicken (Tympanuchus pallidicinctus) (LPC) to the list of threatened and endangered species. The Service listed the Southern DPS which ranges in west Texas and New Mexico as endangered and the Northern DPS which ranges in northern Texas, western Oklahoma and Kansas, and southeastern Colorado as threatened. The listings are based on the Service’s determination that conservation efforts led by wildlife agencies in the LPC range states will not be sufficient to offset the ongoing loss and fragmentation of large, connected blocks of suitable grassland habitat due to causes that include, but are not limited to, energy development, conversion of grasslands to cropland, and woody vegetation encroachment into the species’ native grassland habitat. 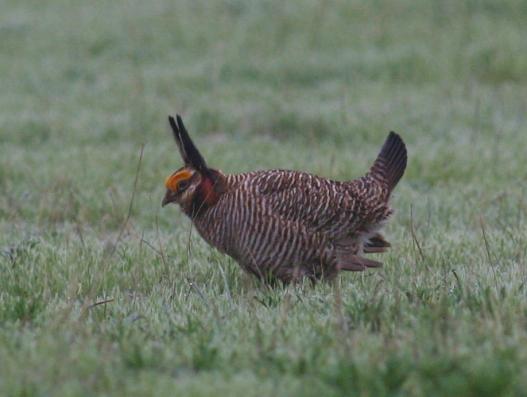 The Service initially determined that the LPC was a candidate for listing under the Endangered Species Act in 1998, but did not take action to list the species at that time. The Service listed the LPC as threatened across its entire range in 2014, but that listing was vacated by a court ruling in 2015. In 2016, the Service received a petition to list the species as endangered across its range. In May 2021, the Service published a proposed rule that identified two DPSs and proposed listing one as endangered and one threatened. After reviewing public comments on the proposed rule and completing a species status assessment in March 2022, the Service concluded that the southern DPS was in danger of extinction and the northern DPS in danger of becoming endangered within the foreseeable future.

Over the past decade as the listing status of the LPC played out, the five range states, along with the Service and other partners, initiated numerous efforts to conserve LPC habitat. Two of the most significant of these efforts were development of a Range-Wide Conservation Plan in 2013, a Range-Wide Oil and Gas Candidate Conservation Agreement with Assurances (OGCCAA) in 2014, as well as multiple other Candidate Conservation Agreements with Assurances (CCAAs) and Habitat Conservation Plans. The Range-Wide Plan called for coordinated implementation of incentive-based landowner programs and implementation of a mitigation framework to reduce threats and provide resources for off-site conservation. The OGCCAA is administered by the Western Association of Fish and Wildlife Agencies and is designed to allow continued development of energy resources with minimal impacts to LPC habitat. According to a 2021 progress report, 111 active industry participants had enrolled 6,226,140 acres and contributed $1,731,750 under the CCAA resulting in 22 conservation properties and 115,414 acres of habitat unimpacted by development.

Despite ongoing conservation efforts, the Service found that resiliency of both DPSs was low and declining. In the Southern DPS, redundancy and representation are also low. In the Northern DPS, redundancy and genetic and environmental representation are currently higher, but modeling demonstrated that the pace of habitat loss is projected to outpace conservation, resulting in eventual extinction of this DPS as well, unless further protection is provided under the Endangered Species Act. Both DPSs have also suffered from the ongoing, long-term drought across the southwestern U.S.

In the listing decision, the Service included a 4(d) rule for the Northern DPS in response to concerns from states and livestock producers about the continuation of managed grazing. The Service found that managed grazing and prescribed fire can be valuable tools for maintaining grassland habitat preferred by LPCs and provided exemptions from prohibitions on take of LPC for routine agricultural activities on previously cultivated lands, use of prescribed fire for grassland management, and grazing under site-specific grazing management plans developed by a qualified party approved by the Service. In addition, oil and gas producers, renewable energy projects, and grazing enrolled under pre-existing CCAAs or Habitat Conservation Plans will be allowed to continue under the terms of those agreements or plans.

The listings and 4(d) rule will take effect January 24, 2023. Additional information about the listings is available here.