Michigan Reports Results of Testing of PFAS in White-tailed Deer

Michigan Reports Results of Testing of PFAS in White-tailed Deer

The Michigan Department of Health and Human Services (MDHHS) released the final report detailing the findings from the per- and polyfluoroalkyl substances (PFAS) deer testing in Michigan. As part of the state’s effort to identify and address PFAS issues in Michigan, MDHHS and the Michigan Department of Natural Resources (DNR) took samples from 128 deer across Michigan to test for PFAS. Only one of those deer came back with elevated levels of PFOS (perfluorooctane sulfonic acid) in muscle tissue. That deer, from the Clark’s Marsh area, resulted in a ‘Do Not Eat’ advisory issued in October, 2018 for deer harvested in a 5 mile radius around Clark’s Marsh. 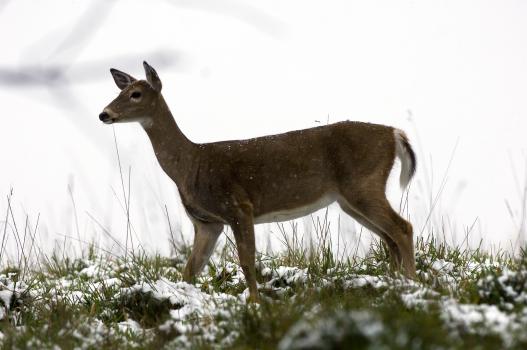 The report released includes all of the finalized deer muscle, kidney, and liver data collected for the 128 deer sampled as part of this effort. DNR and MDHHS developed this investigation in response to questions from hunters concerned about harvesting deer in contaminated areas. This is believed to be the first study of its kind and very little scientific information exists on white-tailed deer and PFAS chemicals.

It is unknown how PFAS could accumulate in deer. The State of Michigan is investigating the circumstances of the one deer with elevated levels and doing further analysis to learn more about PFAS in deer and other wildlife. In addition, the state will be doing further testing on deer from the Clark’s Marsh region and performing modeling studies to learn about PFAS consumption in wildlife. Michigan also regularly monitors fish in Michigan for PFAS, including PFOS.

PFAS are chemicals that are in Class B fire-fighting foam that was used at the air force base near Wurtsmith and other sites in Michigan. These chemicals are also found in stain and water repellants, personal care products, and many other consumer goods. Some health studies have linked PFAS to health issues such as thyroid disease, increased cholesterol levels, impaired immune system function, reproductive issues, high blood pressure in pregnant women, and increased chance of kidney and testicular cancers.

In additional news about PFAS, a bipartisan group of twenty Congressional House lawmakers established a bipartisan task force to combat the dangers posed by PFAS, due to the link between drinking water contamination and human health. The group will mainly work to educate their colleagues about the health risks associated with per- and polyfluoroalkyl substances (PFAS), craft legislation to address PFAS contamination, coordinate activity with House leadership and committee chairmen, and fight for more federal funding to clean up PFAS pollution, members of the PFAS Task Force said during a press conference.