Scientists, foresters, and communications specialists from Maine, New Hampshire, Massachusetts, Rhode Island, New York, and Connecticut joined with colleagues from the USDA Natural Resources Conservation Service, the U.S. Fish and Wildlife Service (USFWS), and the Wildlife Management Institute at the annual New England Cottontail Technical Committee meeting. The purpose of the meeting, held January 14-16, 2020, in Southbury, CT, was to advance efforts in carrying out the Conservation Strategy for the New England Cottontail, released in 2012, a science-based strategy that relies on an adaptive management approach, incorporating frequent, ongoing input from field biologists and researchers. 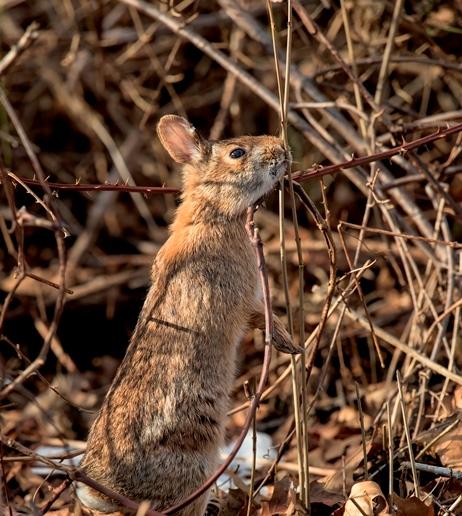 New England cottontail browsing on vegetation in the thick habitat the species needs.

Although the New England cottontail’s population has generally fallen over the last several decades, progress is being made. Said Anthony Tur, At-Risk Species Coordinator for the USFWS’s North Atlantic and Appalachian Region and a co-author of the original Conservation Strategy, “We know that our work isn’t done, and we’re committed to forging ahead to secure the future of the species.”

The New England cottontail (Sylvilagus transitionalis), sometimes called a “woods rabbit,” inhabits shrubby swamps, old fields overgrown with shrubs and small trees, and thick young forest that grows back following a disturbance – whether caused by fire, windstorm, flood, or a management action such as a timber harvest. Over the last half century, young forest and shrubland habitats have dwindled in the cottontail’s southern New England range. The New England cottontail was a candidate for the federal Endangered Species list until 2015, when the USFWS determined that the commitment by partners working to implement the Conservation Strategy – including captive breeding and the creation of hundreds of acres of habitat – had a “high degree of certainty” for helping the population recover.

The Conservation Strategy set a goal of 13,500 New England cottontails, which would require an estimated 27,000 acres of high-quality habitat by 2030. The six states with New England cottontails are striving to meet even higher population and habitat goals: 21,640 rabbits on 42,440 acres by 2030. Preliminary results from the Initiative’s 2019 Performance Report suggest that the population of this secretive animal may be more than 13,000, and habitat acres may exceed 83,000 acres.

While that population figure approaches the USFWS goal, “Our work is far from finished,” said USFWS biologist Tur. “We need to continue monitoring populations, and managing the ephemeral habitat that the species depends on.” He cited a need to improve and expand captive breeding, plus “find key areas where we can introduce both captive-reared and wild-caught animals to establish or bolster populations.”

Other challenges include gaining more knowledge about how eastern cottontails (introduced to the region during the last century, and now much more abundant than the native New England cottontails) may exclude the native rabbits from habitat. Scientists also continue to learn, and managers to apply, the best methods of creating pockets of habitat that will give New England cottontails a good chance of remaining on the landscape.

At the meeting, USFWS biologist Eileen McGourty reported on the May 2019 release of eight female and five male New England cottontails on 628-acre Nomans Land Island, an unoccupied island southwest of Martha’s Vineyard. The rabbits were outfitted with collars; McGourty and her colleagues can remotely download dispersal and home range data from the collars via a satellite feed from two on-island electronic base stations. As of January 2020, 12 of the 13 individual rabbits still survived. (The animals used to establish this small population were caught in the wild elsewhere in Massachusetts.) “We hope to ultimately have a healthy, well-established population on Nomans,” McGourty said, one from which biologists can capture rabbits for reintroduction into other habitats elsewhere in the species’ range.

T. J. McGreevy, director of the Wildlife Genetics and Ecology Laboratory at the University of Rhode Island, reported on a well-established cottontail population on Patience Island in Narragansett Bay. He noted that genetic analysis of pellets (droppings) shows that more than 100 New England cottontails are using the entire 210-acre island. Introduced to the island in 2012, the relatively small number of released rabbits quickly increased in numbers, and this population is now being used as a source for establishing the species at Great Swamp Wildlife Management Area and Ninigret National Wildlife Refuge, both in Rhode Island.

Each state’s representative to the Technical Committee reported on efforts to create, refresh, and protect habitat within designated “focus areas,” identified as the best places in the respective states to concentrate habitat-creation work.

At the meeting, progress reports were shared by the chairs of the following work groups: Administrative, Information and Adaptive Management, Research and Monitoring, Population Management, Outreach and Education, and Habitat.

The meeting also included a field trip to six sites where biologists with the Connecticut Department of Energy and Environmental Protection have found New England cottontails, and where conservation partners have been actively creating or safeguarding habitat for them. The sites included municipal properties; Bent of the River Audubon Center; the Newtown Forest Association’s Nettleton Preserve; and the Pequot Fish & Game Club.