On January 23, 2020, the Environmental Protection Agency (EPA) and the Department of the Army (Army) finalized the Navigable Waters Protection Rule to define “Waters of the United States” (WOTUS) under the Clean Water Act. Within the new rule, the agencies are recognizing the difference between federally protected and state protected wetlands to “achieve the proper relationship between the federal government and states in managing land and water resources.” 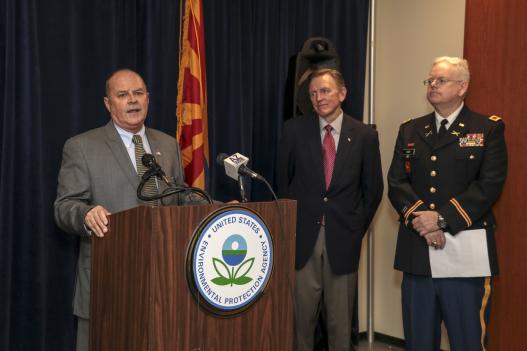 “EPA and the Army are providing much needed regulatory certainty and predictability for American farmers, landowners and businesses to support the economy and accelerate critical infrastructure projects,” said EPA Administrator Andrew Wheeler. “After decades of landowners relying on expensive attorneys to determine what water on their land may or may not fall under federal regulations, our new Navigable Waters Protection Rule strikes the proper balance between Washington and the states in managing land and water resources while protecting our nation’s navigable waters, and it does so within the authority Congress provided.”

The new rule will go into effect 60 days after it is published in the Federal Register and includes a new definition of Waters of the U.S. that will be federally regulated under the Clean Water Act. The new definition:

The final rule eliminates Clean Water Act protections for wetlands that do not have surface water connections to intermittent or perennial streams, which account for more than 51 percent of the nation’s wetlands. Wetlands serve as the nation’s kidneys, filtering pollution, buffering stormwater and absorbing floodwaters, as well as acting as habitat for wildlife. One change made between the draft and final rule was that the draft rule required wetlands to physically abut larger waterways and have a surface water connection in a “typical year” – which is defined within the new rule to give regional and temporal flexibility to ensure that jurisdiction is properly determined in times that are not too wet and not too dry. The final rule still requires the surface water connection to larger waterways in a typical year but the wetland does not necessarily have to touch them. This will mean that wetlands near a river that typically floods would be covered under the final rule.

The new rule will also remove protections for ephemeral streams that flow only after rain or during snowmelt, which accounts for 18 percent of streams. Although the original proposal would not have protected perennial or intermittent streams that flowed into ephemeral stream beds, the final rule was revised to maintain protections for these upstream stretches if they contribute downstream water in a typical year.

In October 2019, the EPA and Department of the Army published a final rule to repeal the Waters of the U.S. definition that was included in a 2015 Rule finalized under the Obama administration. Litigation of the 2015 Rule created differences in implementation and ultimately the rule was in effect in only 22 states. With the 2019 action, the WOTUS definition reverted back to previous regulations. According to the EPA website:

The repeal of the 2015 Rule was considered “Step One” in a process to evaluate a revised definition for waters of the U.S. They proceeded with a public outreach and engagement process to develop the new Navigable Waters Protection Rule that was announced last month. The final rule will become effective 60 days after it is published in the Federal Register and will replace the Step One Rule that was published in October 2019.

The Consortium of Aquatic Science Societies (CASS), a group of nine professional societies with a total of more than 20,000 member scientists, strongly criticized the new Waters of the United States definition. In a press release, CASS stated that “the redefinition is inconsistent with the best-available science. It removes protection for millions of stream miles and acres of wetlands that keep waters and watersheds healthy. Impairment of headwaters and wetlands affects water quality and flow for entire watersheds. The rule threatens critical headwater and wetland ecosystem services, like water quality protection, aquifer recharge, organic material transport, safeguarding habitats for endangered species, and support for recreational and commercial fishing economies. Climate change and land use intensification have already shifted waters that were permanent to intermittent and intermittent to ephemeral. Under the revised WOTUS, more waters will lose protection, thus severely undermining our nation’s water quality and fisheries.”

Environmental groups and some states are expected to challenge the WOTUS replacement rule. In addition, some conservative groups could also litigate claiming the revision is still an overstep of the federal government’s Clean Water Act authority.