Online digital games can offer a creative and engaging pathway for younger audiences to learn. Ravenswood media was recently awarded a USFWS White-Nose Syndrome (WNS) Small Grants Award to design a game that would help educate younger audiences about the disease. The digital game team lead by Ravenswood Media included Arbor Interactive as the game designer and WNS and bat expertise from Heidi Krester of Wildlife Conservation Society. Together they were tasked with creating a digital game that would be fun to play, and still manage to introduce complicated concepts of disease management and population ecology. 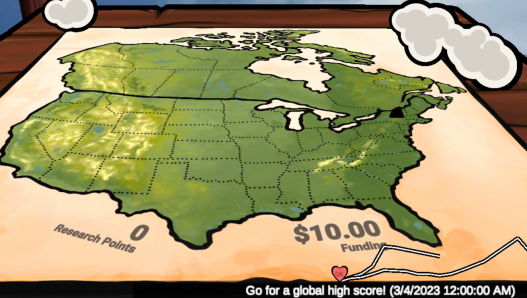 The game is welcoming with fun bat animations but soon the daunting information that a strange new disease is affecting bats is presented, along with your task to stabilize the populations. In this current version of the game, the goal is to keep bats alive as long as possible. As the game player, you step into the role of conservation biologist or habitat manager of bat populations across a map of North America. You explore caves for bats, make decisions to protect bats in a given hibernacula, allow them to be researched, or open their caves and habitats up to tourism. Exploration, protection and research cost resources, and tourism provides resources. A good balance keeps the populations alive longer.

Explicit instructions are not provided, and it can take an unexperienced gamer some time to orient. Game designer Austin Yarger says this is intentional. Since no one wants to read a manual, a successful game is designed so that the gamer figures it out during play. This early version of the game is still being tweaked from user feedback. Additionally, a future version might allow an option to win the game by finding resource management strategies that lead to a sustainable population. In the current version, extinction is inevitable – a high score is reached by keeping the bats alive long into the future.

The game design team brought extensive expertise on WNS, bat population metrics and digital game play. They took a hybrid approach to balance realistic data, such as the time for fungal spores to reproduce or the flight speed of bats, with fun and engaging details like an occasional bat in a top hat, to bring in some humor to a pretty devastating game concept. The idea is to keep the game engaging long enough for a young user to absorb some of the main ideas about WNS and bat conservation.

When the game is finalized it will be available on whitenosesyndrome.com.