Michigan DNR research vessel Lake Char operates in Lake Superior, the largest and northernmost of the Great Lakes of North America. The crew documented lake trout spawning in deep water at Isle Royale in June, outside the expected fall spawning period. The crew used a deep-water remotely operated vehicle that deployed a video recorder, electroshocker, and vacuum sampler to confirm that lake trout were spawning in June and at the deepest ever documented lake trout spawning in water over 300 feet (91 m) deep. 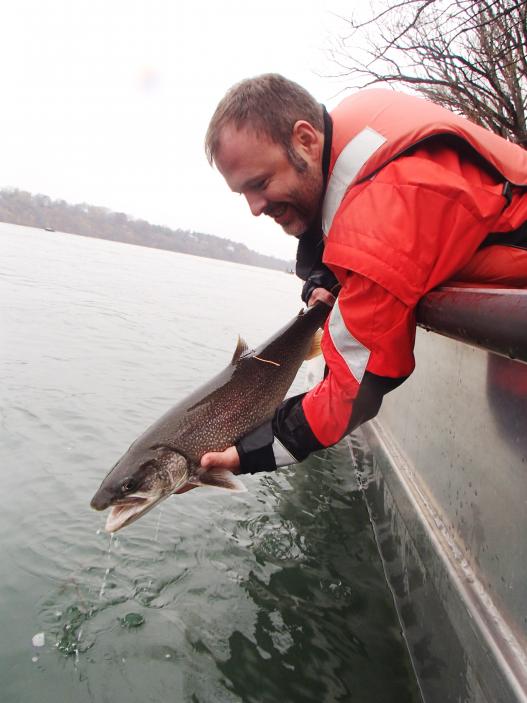 Lake Superior’s average depth is 483 ft (147 m) with a maximum depth of 1,333 ft (406 m). American limnologist J. Val Klump was the first person to reach the lowest depth of Lake Superior in 1985, as part of a scientific expedition, which at 733 ft (223 m) below sea level is the second-lowest spot in the continental interior of the United States. Today, it seems almost unbelievable that this depth wasn’t reached until just 25 years ago.

Compared to stream-spawning salmonines, relatively little is known about spawning behavior of lake trout. Direct observations of spawning behavior are rare because lake trout spawn mainly at night, in deeper water than stream-spawning salmonines, and during a logistically challenging season for field observations when autumn weather changes to winter. In the Great Lakes, lake trout spawn on shallow shoals in the lakes, although some historical populations spawned in tributary streams. Spawning occurs mainly between September and December, but timing varies with latitude and temperature. In autumn, lake trout migrate onto shoals in nearshore areas of lakes; the timing generally coincides with surface water temperatures declining to 12°C or lower. Most spawning shoals are less than 6 m deep and situated close to deep water, but can range from very shallow in small lakes (0.15 m in Squam Lake, New Hampshire) to 40–50 m in the Laurentian Great Lakes, with evidence of potential spawning at 91 m depth in Lake Superior documented by Eschmeyer in 1964. Most of the behavioral aspects of lake trout spawning were learned relatively recently by video-camera recordings obtained by scuba divers operating in water depths less than 100 feet deep (~30 m).

Remotely operated vehicles (ROVs) offer a robust survey tool for quantifying these pressures and tracking the success of management intervention while at a range of depths, including those inaccessible to most SCUBA diver-based survey methods (greater than 100 feet or ~30 m). ROV surveys use an unmanned underwater submersible that transmits real-time video observations and environmental readings (e.g., depth, compass heading) via an umbilical tether to the operator at the surface. Exploratory studies are important for collecting baseline information in locations with little a priori knowledge, in order to obtain a general understanding of species distributions necessary to inform future research directives.

Michigan researchers surgically implanted acoustic tags that transmit the fish’s position to a receiver array to help pinpoint where lake trout were concentrating (potentially to spawn). Once the data were downloaded from the recovered receivers, target sites were selected for the ROV mission in 2021 in the hopes of verifying spawning by finding eggs. The cameras recorded fish spawning behavior and the vacuum sampler obtained substrate samples which were confirmed to have lake trout eggs.

The documentation of lake trout spawning at depths greater than 300 feet (90 meters) and in June adds new information about the complex spawning strategy of lake trout. Such information is critical to understanding current population dynamics of lake trout as well as forecasting lake trout response to increasingly variable climatic conditions.