The Oregon Cooperative Fish and Wildlife Research Unit (Oregon CRU), Ecosystems Mission Area, USGS, at Oregon State University, and the Oregon Department of Fish and Wildlife are conducting collaborative research on ringtail, a small, secretive, omnivorous (feeds on plants and animals), nocturnal relative of the racoon. 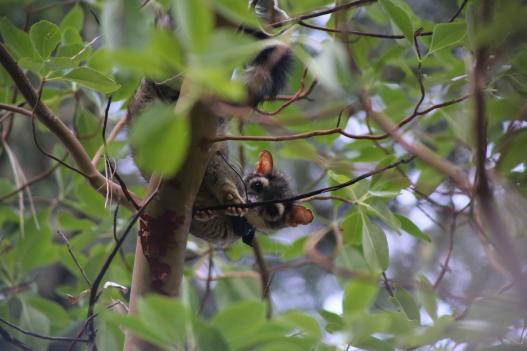 Ringtail are an Oregon Conservation Strategy species and listed as “sensitive” in Oregon, which represents the most northern portion of their range. Although ringtail have been studied in arid environments and within forests of northern California, very little is known about ringtail ecology in Oregon. Information is needed on ringtail distribution, abundance, population dynamics, and habitat use. Specifically, researchers will estimate ringtail survival rates and describe characteristics of daytime rest sites and use Global Positioning System (GPS) collars to estimate home range size and movement patterns of ringtail.

The research team deployed remote cameras to detect ringtail at baited sites, and each captured ringtail was given a Passive Integrated Transponder (PIT) tag that allowed each animal to be uniquely identified. PIT tags do not require power, but instead, they have an internal microchip that is activated when it passes close to a special antenna. If a ringtail is recaptured, the special reader can be used to read the tag while the animal is in the trap.

Captured ringtail are also fitted with radio telemetry VHF transmitter collars or GPS collars, depending on the size of the animal. GPS collars are programmed to record three locations per night using satellites. Researchers then use a handheld “black box” data downloader, that transfers location data from the collar using UHF frequency (line of site < 6km) or Bluetooth (<30m). All collars are also equipped with a unique VHF frequency so they can be monitored weekly for survival and tracked to daytime resting sites using a handheld receiver and antenna. The GPS location data will be used to document movement patterns and estimate home range size and shape. The daytime resting locations will be used to describe the landscape and habitat characteristics surrounding daytime resting structures.

Ringtail use daytime resting structures between periods of nighttime activity because they provide daily protection from predators and inclement weather. These resting sites are also where females bear and raise young. Given their small size and vulnerability, rest site characteristics and availability may be a key resource for ringtail. In this study area, ringtail are most often found resting within live or dead standing trees (73% of observed rest sites) and less often within rock structures, logs, brush piles or woodrat nests, which account for 27% of observed rest sites. In addition to documenting the types of rest structures used by ringtail in Oregon, this project will provide critical information on the important features of those rest structures and the surrounding habitat.

The project is currently ongoing and scheduled for completion in 2023. The information collected during this research will add to the understanding of ringtail ecology at the most northern edge of their distribution and aid in the development of a large-scale monitoring program for ringtail in Oregon. The results of this research will provide information specific to Oregon regarding annual and seasonal survival rates for ringtail and the characteristics of daytime rest sites, an important habitat for the species. This information will help inform conservation and management by Oregon Department of Fish and Wildlife and other natural resource management agencies.