Scientists with the USGS Louisiana Cooperative Fish and Wildlife Research Unit are leading research on one of the most economically important and productive oyster fisheries in the United States, with harvest revenue exceeding $35 million in dockside sales every year. Well-loved for their culinary contributions to Louisiana culture, the eastern oyster also plays an important role in keeping our coastal waters clean. With more than 60 percent of U.S. coastal rivers and bays moderately to severely degraded from excessive nutrient loading (also known as eutrophication), the eastern oyster is a valuable ally in offsetting declines in water quality. 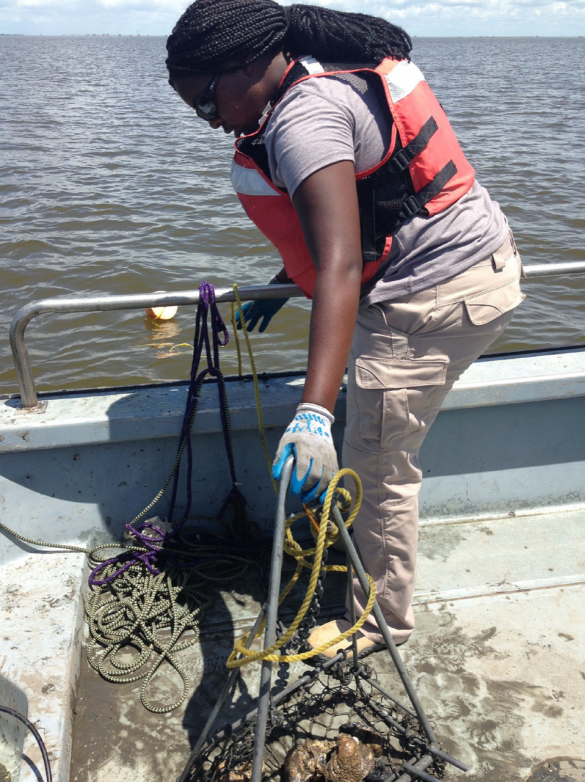 The eastern oyster is often referred to as an “ecosystem engineer” because oysters and their reefs change the system in which they exist. Oyster reefs provide valuable microhabitats for crustaceans, invertebrates, and finfish; and promote shoreline stabilization by reducing wave energy, and contribute to mitigation of nutrient loading.

As suspension feeders, oysters filter water column nutrients, plankton and seston (floating organisms), using these materials to fuel their basic biological functions, such as growth and metabolism. As oysters grow, both nitrogen and carbon are assimilated into their tissue and shell (i.e., bioassimilation), and, when harvested by fishermen, provide for a net removal of these nutrients from the water column.

The potential removal of carbon and nitrogen in oyster tissue and shell through commercial and recreational harvest is high. In a study conducted by Louisiana State University AgCenter, oysters collected from reefs located in Sister (Caillou) Lake and Lake Fortuna, Louisiana were found to contain, on average, approximately 0.3 g of nitrogen and 10 g of carbon. Based on 2013 harvest from these two regions, this translated to a removal of over 10 tons of nitrogen and 375 tons of carbon from the system in one year. While shell may be sometimes returned to the system to provide for future reefs, over 50% of nitrogen is found in the oyster tissue, indicating that harvesting and eating the oysters still provides a valuable contribution to nitrogen removal.

In the absence of commercial harvesting, oysters allowed to grow and build reefs may also be critical in removing nutrients from the water. Particles and nutrients that are not incorporated into their tissues and shells are excreted onto the surface of the sediment in packages called “pseudo-feces”. These pseudo-feces can be either buried in the reef, re-suspended into the water column, or undergo chemical transformation to nitrogen gas (i.e., denitrification). In the latter, deposited nitrogen diffuses from the sediment to the water column and ultimately back to the atmosphere, providing a natural process for net removal of nitrogen from coastal waters. This process of denitrification is thought to be one of the most significant processes removing excess nitrogen in estuaries, however most work has focused on this process within the marsh landscape.

Although the researchers lack an exact state-wide estimate of oyster reef habitat acreage, they know that there are over 2 million acres of private and publically managed reefs supporting oyster harvest, and an equally large if not greater amount of non-managed reef areas that may also contribute to removal of nitrogen from the water column. Further investigation into the exact extent and distribution of these oysters will help researchers more fully understand oyster reef contributions to nutrient mitigation.

This preliminary work provides evidence that oysters also permanently remove nutrients from the system through both bioassimilation and denitrification. Given the prolific annual oyster harvest and the extensive reef systems across coastal Louisiana, bioassimilation and denitrification may be important drivers of nutrient mitigation across the coastal region of the state. Ensuring the health and maintenance of Louisiana’s oyster reefs is a critical piece of coastal protection.