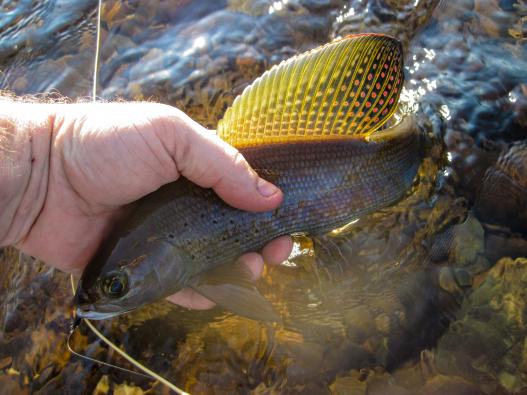 The Arctic Grayling, Thymallus arcticus,(Grayling) was historically found in many coldwater streams throughout the Lower Peninsula of Michigan and in one Upper Peninsula stream. Large populations of Grayling flourished in the Manistee and Au Sable Rivers, commanding such importance that one community adopted and bears its namesake. Over a few decades in the late 1800s, the Grayling played a prominent role as both a commercial food fish and as an attractive game fish, and the species is recognized as an important part of Michigan’s history. However, habitat destruction, unregulated harvest, and predation/competition with introduced trout species led to the demise of one of Michigan’s iconic stream salmonids, resulting in Grayling being extirpated from Michigan by 1936.

While many efforts to re-introduce Arctic Grayling have failed in Michigan, this new effort began to come together in 2016 with preliminary conversations with the Little River Band of Ottawa Indians regarding Montana’s success in reestablishing Grayling. A major change from past efforts is the amount of new science and technology concerning all aspects of fish production and in-stream establishment, including fish health. Eggs imported to Michigan from Alaska will be held in an isolation facility until they have passed rigorous health exams. All brood lots will be inspected on an annual basis following the American Fisheries Society “bluebook” protocol for fish disease testing, and pathogen testing will be consistent with the Great Lakes Fish Commission’s “model program for Fish Health Management in the Great Lakes.” Methods to ensure successful establishment of Grayling include careful assessment of release locations, assessment of competitors and predators, and other tactics.

A second major change from previous efforts is the funding model being used. Numerous partners are committing time and financial resources to this effort rather than just having the Department of Natural Resources or the Tribes funding the majority of the effort. In addition, the partnership is relying on foundation and private grants to help fund the effort. Collaboration among tribal, federal, state, academic, and angler group partners will be important to assess fish communities and habitat conditions in streams throughout the historic range in Michigan. Partners have agreed to not chemically reclaim streams for the purpose of establishing Grayling, although researchers will investigate relationships between resident trout and Grayling.

Updates to this effort can be found at https://www.migrayling.org/