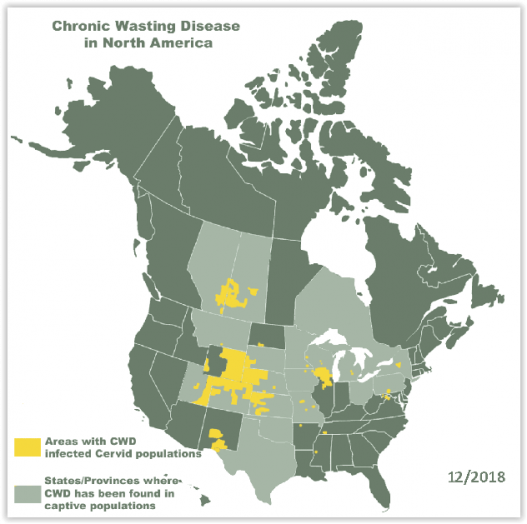 That all changed in February 2018 when the Mississippi Department of Wildlife, Fisheries, and Parks (MDFWP) reported a CWD positive 4-year old buck from Issaquena County in the southwestern part of the state. As nearby states scrambled to enact emergency regulations restricting whole carcass importation from Mississippi, the MDFWP continued surveillance, reporting their second case 130 miles from the initial case near the Tennessee border in October 2018, and a third case, near the site of the initial case in December 2018. Their most recent report indicates six confirmed cases in the state.

In December 2018, surveillance efforts of the Tennessee Wildlife Resources Agency (TWRA) indicated that 13 deer sampled from the wild in the southwestern part of the state were positive for CWD. States that ban importation of cervid parts from infected states once again scrambled to enact emergency rules to add Tennessee to their list of prohibited states. In January 2019, TWRA reported that preliminary tests indicated an additional 11 deer were positive for the disease.

These two most recent discoveries bring the total number of states that have found the disease in either captive or wild cervids to 26. Three Canadian provinces also have found CWD in cervids. Although several infected states with high cervid densities are working to manage CWD, it is not insignificant that the southeastern incursion of this disease is in a part of the country that contains extremely high densities of wild, free-ranging white-tailed deer.

For the past two decades, wildlife disease researchers and practitioners have studied the etiology of CWD, developed management plans, made recommendations, and generally supported state fish and wildlife agency efforts to control the spread of the disease. These efforts culminated in the “AFWA Technical Report on Best Management Practices for Prevention, Surveillance, and Management of Chronic Wasting Disease” produced by the Association of Fish and Wildlife Agencies in 2018.

The identified control efforts are premised on the theory that the single biggest risk factor for spreading CWD is the movement of both live animals by the captive cervid industry and infective tissues associated with whole carcasses transported by hunters. State fish and wildlife agencies largely adopted these recommendations while tempering them with alternatives to help reduce the burden on recreational hunters. The collective efforts of the states have resulted in a gradual movement toward levels of protection that attempt to foundationally incorporate the best available science. However, individual modifications designed to reduce the burden of recreational hunters harvesting deer, elk, and other cervids away from their home state is becoming problematic.

To further the confusion, states that restrict the importation of cervid carcass parts fall into primarily two groups: those that minimally allow quartered meat (with no spinal or neural tissue attached) and those that require meat to be de-boned or processed. Currently 25 states allow quartered carcasses to pass through their state, and 15 require that the meat be de-boned or processed. Four additional states allow the limited importation of whole carcasses under certain conditions (transporting into an existing CWD zone; transporting directly to processor/taxidermist; transporting directly to a personal residence). Once again, this variability in legal requirements for transporting cervid meat leaves out-of-state hunters to work their way through a myriad of state requirements as they return home. Even hunters that have done their homework ahead of their hunt may be put in legal jeopardy if a state turns positive and other states immediately file emergency regulations restricting importation during the hunting season.

Finally, there is significant confusion among hunters about their “rights” via Interstate Commerce law to acquire legally-taken game from one state, transit any number of other states where differing laws may apply, and return to their home state. Most hunters mistakenly feel that it is their right to do so. However, and to the contrary, if a hunter transports carcass parts into a state where it is illegal, and that state chooses to prosecute, an interpretation of the Lacey Act could put the hunter in jeopardy for transporting carcass parts that were legally taken in the originating state, and legally possessable in his or her home state, if they were caught and prosecuted by the transiting state where those parts were illegal to import, export, transport, or possess.

Recommendations by wildlife disease professionals have long held that the most prudent measure to stop the spread of CWD is to restrict the movement of any cervid, live or dead, entirely. However, this is not a workable solution to state agencies whose mission is to support hunters, including those that travel from other states, to hunt deer, elk and other members of the family Cervidae. The second tier of restrictions thought to provide adequate protection is the prohibition on movement of highly infective tissue (neural, lymph, blood, saliva, feces, antler velvet, and other soft inedible tissues). Obviously de-boned or processed meat and clean teeth, antlers, skulls, etc. provide the second highest level of protection, since little is left to be discarded once the hunter returns home. Finally, the spread of the disease across the country has now resulted in more than half the states being infected. The decision to restrict carcass parts from only infected states is largely an exercise in futility and likely hinders rather than helps the traveling hunter, as it was originally intended.

CWD continues to spread across the country despite two decades of monitoring and movement restrictions. Hunter numbers also continue to decline, with an often-reported reason that regulations are complex and difficult to understand. The best available science combined with the need to keep hunters in the field strongly indicates that there is one best alternative for states that would both slow the spread of this disease and fairly service hunters that choose to pursue deer elk, and other cervids. That best alternative is for all states to enact uniform rules or regulations for carcass transport. These rules or regulations should accomplish the following:

If all state agencies agreed to and adopted these uniform standards, they would have addressed the need to minimize the spread of infectious CWD materials to the greatest practical extent while concurrently providing coast-to-coast and border-to-border consistency which hunters will understand and with which they can comply without fear of legal jeopardy as they return their hard-won harvest to their home states.